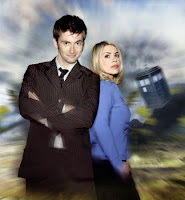 While I might be sunning myself (and catching up on some reading) here in tropical Hawaii, I thought I would be terribly remiss if I didn't at least say a few quick words about tonight's two-hour season finale of Doctor Who on Sci Fi.

I had the opportunity to watch the two-hour finale ("Army of Ghosts"/"Doomsday") before I left Los Angeles and it was with a certain sadness that I bade farewell to the Doctor and Rose, especially as any announcement about the series' third season airing on US television has yet to be made. UK viewers, however, have the Doctor Who Christmas Special, "The Runaway Bride," co-starring the always hysterical Catherine Tate, to look forward to in just a few days. (Lucky bastards.)

In any event, tonight's two-hour Doctor Who season finale wraps things up satisfactorily in more ways than one. That "storm" on the horizon that the Doctor mentioned at the end of last week's episode does indeed materialize, precipitated by those mysterious operatives known as Torchwood, who finally come out into the open after much teasing from the series' creator Russell T. Davies. Well, the London branch of Torchwood, anyway. As for what's going on in Cardiff, you'll have to wait for SOMEONE to acquire Who spin-off Torchwood to find out what's going on there.

The Doctor and Rose have faced a number of challenges and dangers together, but this is their most dangerous mission yet and it involves the return of several familiar faces as well as the return of some much-loathed enemies. It's also the story, sadly, of how one Rose Tyler dies. Before everyone gets up in arms about spoiler-alerts and so on, let me just tell you that Rose herself admits this in the opening sequence and... things are not always what they appear to be. Especially on a series as surreal and trippy as Doctor Who.

I cannot say enough complimentary things about David Tennant's performance as the Doctor. BBC America is rerunning the first season of Who starring Christopher Ecceleston and, while at the time I loved Ecceleston as the Doctor, he simply pales in comparison to Tennant's nuanced and easily excitable turn. His Doctor oozes with curiosity, passion, and wacky intellect, but it's colored with a deep lonely shade of blue hiding behind his stripy suits and trainers.

Me, I'll admit that the end got me more than a little teary (you'll know what I mean when you see it tonight) but I am excited to see what the next chapter in the Doctor's life brings. In "Army of Ghosts"/"Doomsday," things come full circle for both the Doctor and Rose Tyler (not to mention the Tyler family as a whole) and the direction of the series is forever altered after this two-hour finale. Doomsday does come for Earth (several of them, in fact) and for our brave heroes, both of whom prove that old adage that sacrifice is in fact the cornerstone of heroism with a capital H.

The second season finale of "Doctor Who" airs tonight from 8-10 pm ET/PT on Sci Fi.

It's the second season finale of Doctor Who tonight. On the first of tonight's two episodes ("Army of Ghosts"), ghosts of the dead return to Earth while conveniently (and perhaps not too coincidentally) an invasion force makes its way inexorably towards Earth. On the second episode ("Doomsday"), the invasion force--comprised of two of the Doctor's gravest enemies--attacks the planet and the Doctor is forced into a bit of a quandry when something terrible emerges from beneath the Torchwood Tower. Could this be the end of the Doctor and Rose's beautiful friendship?

It's the US premiere of Britcom Hardware, starring Martin Freeman of the original UK version of The Office, taking place at a small (you guessed it!) hardware store. On tonight's episode ("Finger"), Steve cuts his finger off and causes pandemonium in the shop, while Mike's girlfriend attempts to build a collapsible ironing board.

It's the third season of the scathingly sarcastic Black Books, one of my favorite Britcoms. On tonight's episode ("A Little Flutter"), Bernard becomes addicted to gambling after Manny places a bet for him and he begins borrowing money from some Very Scary People. And, no, I don't mean Fran's distant relatives.

It's a pair of episodes of Creature Comforts, the delighfully insightful and whimsical animated British interview series about Christmas. Tune in to learn why dogs hate wearing Christmas hats and why Corgis tend to get so emotional around the holiday season.

Anonymous said…
I also had the opportunity to see this episode early and it is absolutely brilliant...as well as sad, funny, campy, and all of the things Doctor Who should be. David Tennant is the best Doctor yet! I really hope we'll be able to see Season Three soon!
12/22/2006

Roger said…
Ecceleston pales in comparison to Tennant?! Oh please. This fruity incarnation is too over the top and swishy.

David Tennant is the sexiest Doctor yet. And an incredible actor as well. The Doctor has always been an eccentric character and Tennant plays him with a passion that has yet to be rivaled. Now I can't imagine anyone else in the role!
12/26/2006

Who has only ever been goofy costumes and rubber monsters. Nothing more.

Tennant's still the fruitiest Doctor ever and will not be missed when he does not return for Series 4. (He's already said he's done.)

The front-runner is currently Andrew Lincoln from Afterlife. He'll at least bring a rough and tumble Doctor to life. Someone not afraid to use a gun to get things done. He'll be a WELCOME RELIEF from Doctor Swishy Fruity.
12/27/2006

We here in the 21st century don't use words like "fruity" or "swishy" anymore.

Tennant is a dynamic, manic lead and I can't imagine Andrew Lincoln (a.k.a. Mr Cardboard himself) taking over from him. As for using a gun, since when has the Doctor ever stooped that low?

Andrew Lincoln IS #11! He will show you what a Doctor can do with a gun and a hard-on in his trousers.

Roger said…
I was close. Jason Statham is a wonderful choice!

Anonymous said…
with all due respect to the comments made, doctor who was created as a farsical time traveling adventure, with out of this world devices. if u want guns and bombs and other such instruments, go and watch mission impossible or something.which, dont get me wrong is brilliant in its own right. doctor who is ment to be an exentric.if he wasnt the intelligent nutter he has always been the show wouldnt hav had the sucsess it has had.and David tennent pulls of the doctor brilliantly.not only is he sexy, contagiously charismatic, and personally one of the most versitile actors in britain today, he also appeals to all generations.i hav a couison who is 2 who is glued with silence wen he comes on, iam 20 an i adore it as do my parents and grandparents(my grandma would leave my grandad for tennent in an instant!)
ecceleston was also brilliant and was a brilliant come back for the show.we must remember his doctor won back the hearts of our country.
doctor who is ment to be taken for what it is...and if that is a absolute nutter hopping from one obscure world to another in a wooden police box with converse and a pinstrip suit then thats what we should love it for!
and as for the companions, im an actress at the moment and that would be like the dream job.doctor who is iconic, proudly british(now welsh!)and what anyone could wish for in saturday nite viewing!
9/01/2007