Airport Snafus, Rowboats, and Ziplines: Just Another Day on "The Amazing Race" 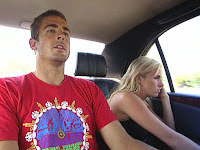 While I've been really enjoying this season of The Amazing Race (especially after the evil, evil blondes got cut), I am really quite curious about whether or not there will be a non-elimination leg. After all, I was convinced that this week's episode ("Cherry on Top of the Sundae That's Already Melted") would prove to be a non-elimination but I was dead wrong.

This week's installment took the teams to the stunningly beautiful city of Dubrovnik, Croatia... after a series of irritating airport-related problems that separated the teams into three clumps that removed all tension and mystery from who would be eliminated. That said, I was surprised to see Azaria and Hendekea catch up to Nicholas and Donald, who took forever on the Road Block task and allowed the sibs to nearly catch up with them (or so it seemed from some sneaky editing, anyway).

While the airport-related snafus are always a part of Amazing Race, the editors seem to telegraph them far too easily these days. As soon as one team mentioned the words "economy tickets," they were repeated endlessly, and sure enough, Azaria and Hendekea inadvertently end up with business class tickets, despite specifically asking the ticketing agent for economy class. Unfortunately for them, they realized this when they were attempting to board the plane and ended up getting on the latest possible flight into Dubrovnik. While I've been a fan of the brother and sister, this week they did grate on my nerves a little bit. Well, the aggressively overbearing Azaria did anyway; his behavior towards his sister--who was right to insist they stay in line--was bordering on the reprehensible. (“Just remember who worked his ass off. I made a bad decision. Get over it, alright?”) Sigh.

Meanwhile, the Goths were right to choose the second flight to Dubronik (selected in order to give themselves some cushion to make it to the gate on time), as the first flight--which held TK and Rachel and Nicolas and Don--landed in Prague without a connection. They ended up making it to Dubrovnik ahead of those teams and sailed into a second place finish after some idiotic mistakes by feuding couple Nathan and Jennifer. I always like how calm and collected the Goths seem and they do appear to be having fun on this race, an attitude that clearly seems to change in the scenes for the next episode. (Argh!) As long as Kynt and Vyxsin can get it together and get back to being the supportive duo that they are, I'll be happy.

As for Nathan and Jennifer, it's clear that these two have no future together; they can't even manage to row a boat through the harbor without it turning into a hateful argument in which they tell each other how much they hate the other and that they are the meanest people in the world. Still, I would have been frustrated by their inability to snag a taxi because they were slightly damp from the rowboat Detour but, then again, the directions explicitly stated that they were to travel by taxi to the pit stop. I am soooo over these two, who will clearly need to work together if they have any hopes of making it to the end.

I'm amazed at how well Ronald and Christina are doing, considering their fractured relationship. I thought for sure Ronald was going to go off on Kynt when he told him to stop asking the ticketing agent questions while she was processing their tickets (can't say I blame Kynt) but Christina managed to calm him down and defuse the situation, something I am sure she's had a lot of time to perfect. Still, despite Ronald's combative nature and his multiple injuries, they managed to swoop in for a first place finish and walked away with a 12-foot catamaran.

It was hardly surprising that Azaria and Hendekea were the last team to arrive but, as I mentioned before, I had assumed this whole time that this week would be a non-elimination leg, so I was shocked that they were ultimately cut from the race.

In two weeks on The Amazing Race ("This is Forever, Now"), Kynt and Vyxsin have an argument during a drive, one team (possibly them?) loses their clue and their way in Italy, the fast-forward makes a rare appearance with a task that involves one team making a permanent change to their bodies (ahem, tattoo, ahem) in order to get ahead, one warring team manages to work together, and Phil delivers some shocking news at the Pit Stop. Ooooh.

9 pm: Two and a Half Men/Rules of Engagement (CBS); Girlfriends/The Game (CW); Samantha Who/Notes from the Underbelly (ABC); K-Ville (FOX)

On tonight's episode ("Home By Another Way"), Dan's office is hit by layoffs on Christmas Eve and he must travel back in time to save the newspaper; Katie tries to put the traumatic experiences of recent weeks behind her; Jack and Theresa receive some unexpected news; and a secret about Livia comes to light.

Anonymous said…
This episode was pretty ho-hum after the last few great ones. As you said, it was pretty obvious who was going to be eliminated. Azaria and Hendekea weren't my favorite team but they were strong and I did feel bad that they got eliminated based on a ticket mistake (especially as they did ask the agent for economy tickets). But I guess, ultimately, it's their fault for getting out of line which is funny because Christina was trying to help them and, instead, caused their demise. Oops.

I can't believe we have to wait two weeks for the next episode! I'm nervous about the Goths fight. Keep it together guys!
12/10/2007

Anonymous said…
From what I hear, there are no non elimination legs this year which sucks! It really takes some of the anticipation out and leave this season feeling flat for me.
12/10/2007

Anonymous said…
I was prety convinced it would be non-elim, but then again - I was convinced last week would be one. Maybe there aren't any. That would be ok by me.

I didn't really like A&H, but I do feel bad that they went out because of a mistake that wasn't really their fault. Though...they should have double and triple checked the ticket. They would have seen in a second it was BC.

It's sad - there really was NO suspense this week, except about who was coming in first (I was sure it would be K&V after their comment early in the ep about getting so close each week). Those first three teams were hours ahead of the rest (no fancy editing - we know that 2nd plane landed about 3 hours after the first).
12/10/2007

Anonymous said…
Does anyone else think that the quality of Ron and Christina's relationship strictly depends on how well they are doing in the race? I have a feeling that the minute they slip to the back of the pack, Ron will jump right back to his awful behavior. Granted, he never completely stopped, but he did minimize it to the point where I didn't want to reach into the television screen and throttle him.
12/10/2007

@whitney: Totally agree with you 100%. As long as Ron and Chris do well they get along all peachy but once they drop to the bottom of the pack they are going to get into each other's faces again. Sad but true.
12/11/2007