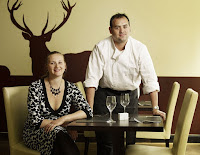 And then there were two.

I was on the edge of my seat while watching last night's penultimate episode of BBC America's Last Restaurant Standing (the finale airs next Tuesday), though it was remarkable to see how much was cut from the US telecast from the original British version, including some scenes that further painted challengers Grant and Jess as slightly coming apart at the seams. But more on that in a bit.

In this week's episode, married marketing professionals Grant and Laura and twin children's entertainers Jess and Laura entered Raymond Blanc's latest Challenge: to cook two of their restaurants' dishes in the kitchens of Raymond's fabled restaurant Le Manoir aux Quat' Saisons and serve it to 30 of Raymond's guests while their teammates worked the front of the house, making sure everything ran smoothly out front. While professional chefs like those on Top Chef could have had this in the bag, it was a quick reminder that the players here are amateurs and that the standards of Le Manoir dwarfed those at their own respective eateries. This is two-star Michelin fine dining at its very best. Would they be able to meet Raymond's rigorous standards or would they collapse under the pressure?

The pressure clearly got to poor Grant, who--as Raymond suggested--seemed doomed from the start, almost as if he woke up that morning and knew he wasn't going to win and therefore didn't put all of his energy into the competition. That said, the revised version of his cullen skink (a Scottish soup of potato, onion, and fish) was absolutely stunning, especially with the addition of serving the soup tableside by pouring it from a beautiful pitcher. Raymond's coaxing and suggestions clearly paid off their, as it transformed the dish from its humble origins into something one would expect to encounter at a fine dining establishment. I do think that he also improved his pollack dish (originally it was crusted and perched atop fondant potatoes and samphire) but the customers still seemed let down by the dish and complained that the fish was overwhelmed by the flavors of the roasted potatoes and samphire. No one called Grant on the fact that he served two fish courses instead of diversifying, a problem I had with his menu from the start. I would have liked to have seen him do something a little bit different, even if his main course wasn't beef.

On the other side of the kitchen, Jess found herself more than a little overwhelmed. I thought her rustic take on a broad bean bruschetta--here elevated to a beautiful broad bean salad with mint and crouton--looked delicious and was fresh and bursting with spring flavors. As for her tuna--marinated in a dry rub of chilies and coriander--being overcooked, Jess wisely didn't send out many of the steaks, which had sat for too long waiting for Grant to catch up. (Quality always over speed.) But she was forced to send some out--which Raymond discovered--when there wasn't enough time to fire off a whole other fleet of tuna to get her dishes and Grant's ready at the same time at the pass. Jess also listened to her commis a little too readily, adjusting the seasoning of the tuna... a major complaint that many had as it was oversalted. In the kitchen, Jess, you've got to realize that you are the one calling the shots and not the Le Manoir commis.

Her explanation for this to Raymond was sadly cut out of the US version, along with some scenes that shed a little more light on what it was like in the kitchen. The scene in which Grant finally unearths a few new potatoes... and realizes he'll need about 5 kilos more for the dinner service was a much longer scene, including an exchange between a downtrodden Grant and Raymond, who tells Grant that he needs to keep his head up and get some energy back. Jess meanwhile has a mini-breakdown in Raymond's amazing vegetable garden but ends up finding inspiration in the freshness and beauty of the garden's bounty (trust me, it's a thing of beauty) to turn her outlook around and gain some perspective. Both are definitely put through their paces in this Challenge and both are forced to present two attempts at their dishes for Raymond to approve before they can be served that evening. That both crucially transform their humble dishes into something more elegant and subtle is a testament to their skills.

Out front, both Lauras dealt with the stress of service in different ways. Scottish Laura, who has always been the consummate hostess throughout this competition definitely crumbled under the pressure, unsure of where to place the cutlery, overlooking crucial details, and fumbling throughout. Twin Laura, on the other hand, really did rise to the occasion, offering a polished, dignified presence in the dining room and never outwardly cracking under the strain, offering a smile and a kind word (albeit sometimes through gritted teeth as John Lederer remarked.)

But only one of these teams would advance to the final round to compete with Jeremy and Jane for the chance to own their very own restaurant with Raymond. Would it be Laura and Grant, whose Scottish-themed restaurant Jacques Tamson's improved the most over the course of the competition? Or twins Laura and Jess whose whole-foods concept restaurant Brown & Green caught on with the locals (and their regulars), even though the place wasn't consistently taking enough profit?

In the end, I do think that Grant and Laura shot themselves in the foot a bit with their pessimism and outward, well, honesty. It's one thing to feel like a fish out of water during a competition of this magnitude, but it's quite another to admit to Raymond and his inspectors that you had no idea what you were doing during the latest challenge. Come on, guys, you're marketing executives. You should be able to sell yourselves better. I knew right then that it would be the twins going into the finals. And that Grant and Laura would be closing their restaurant forever. I do think that the twins do have a stronger brand overall and I am happy that they're still fighting and still trying to win rather than succumb to panic. Will they triumph over Jeremy and Jane? Find out next week.

Next week on the season finale of Last Restaurant Standing, Raymond takes the finalists to his home town of Besançon, France, where they will have less than 48 hours to open their own restaurant here for one night and introduce the French to British cuisine, devising a menu that will appeal to the French and train a new team in a foreign language. Which couple will emerge as the winner and will run their own restaurant with Raymond Blanc? I can't wait to find out.

On tonight's episode ("Ready for My Close-Up"), in a bit of a switch-up, the four remaining girls must photograph Paulina Porizkova for a challenge and then perform in a photo shoot, directed by judge Nigel Barker, that requires them to impersonate famous movie icons... but the judges aren't at all pleased when none of the pictures are particularly stunning.

If you missed MI-5 (aka Spooks) when it aired on A&E a few years back, you can catch it tonight on BBC America. On tonight's installment ("Frequently Asked Questions"), Adam and Danny have only 72 hours to obtain vital intelligence from a mercenary about a missile attack in London but Danny finds himself troubled by Adam's methods.

On tonight's episode ("Wedding Wars"), a quickfire challenge puts the chefs' knife skills to the ultimate test and then the chefs split into teams to cater a wedding and nearly fall off their feet when they must cook for fourteen hours straight. This elimination challenge looks like it might just be the one to fray several chefs' nerves and possibly lead to a complete and utter mental breakdown.

Anonymous said…
I definitely felt that by the time it came to judging, it was clear that Laura and Jess would be moving on to the finals, but it was pretty tense throughout the ep. I am definitely rooting for them, as I've never been huge J&J fans.
5/07/2008

Danielle C.F. Maris said…
I think that J&J and the twins are both excellent teams with very different strengths and weaknesses. J&J know how to provide a beautiful, fine dining experience but Jane is easily upset and Jeremy can be quite stubborn.

Jess and Laura, on the other hand, have taken less chances with their simple menu but have shown that they are truly dedicated to what they're doing and are quick and eager learners.