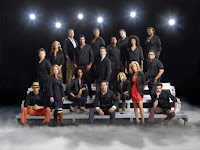 Longtime readers know that I am obsessed with Bravo's culinary competition series Top Chef, but also that I've been disheartened by the last season (and the trainwreck that was Top Chef: Just Desserts), so there was a lot on the line for tonight's season premiere of Top Chef: All-Stars, which reunites some of the fiercest competitors ever seen on the series for another shot at the title.

Arriving as it does on the heels of Top Chef: Just Desserts, there hasn't been a lot of time to regain one's appetite for the franchise, thanks to a schedule that now sees three iterations of the Top Chef formula airing basically year-round. Which might be a recipe for brand awareness, but it doesn't quite keep the franchise at its freshest.

Last season, which saw the competition move to Washington D.C., might is regarded by many as the worst season to date, saddled with some lackluster casting, some dull challenges, and some lazy editing. And Top Chef: Just Desserts, while high on reality-TV drama, was often histrionic and off-putting. Or just plain creepy. ("The red hots were for my mommy!")

Fortunately, Top Chef: All-Stars taps into what made the series so wildly addictive and delicious, bringing back some fan-favorites (Richard Blais! Jennifer Carroll!) and some duds (Stephen Aspirino) and putting them through their paces once again.

The first episode, airing tonight, contains a team Quickfire Challenge that's tied to the history of the show and what might just be the all-time greatest Elimination Challenge ever, one that has a strong emotional hook to it and which ties into the season's underlying theme. (That's all I'm saying on that front.)

Liquid nitrogen, inspired flavor profiles, and strokes of culinary genius mark tonight's episode and offers a taste of what's to come: some kick-ass and cutthroat competition from these returnees as they go head to head with some seriously strong chefs. Wondering just how Angelo might stack up against Richard or Marcel? You're in luck.

Look for egos, rivalry, and bruised feelings as the competition heats up and some nastiness between one chef and one of the judges as old wounds sting after renewed criticism (though, in my opinion, absolutely earned). And a shocking decision at the episode's conclusion. Which adds up to a fantastic episode of television and of Top Chef in general, reigniting my love for this series and keeping me on the edge of my seat.

The winner, in the end, is quite obviously us watching at home.

Jeremy said…
A "trainwreck," really? I thought that Just Desserts was one of the more entertaining of any season of Top Chef. All but a couple challenges were extremely entertaining and I thought the most talented chef won in the end.
12/01/2010