The Daily Beast: "The Death of Will-They-or-Won't-They" 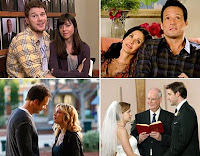 In recent years, it’s been a given that romantic pairs on television had to be subjected to the will-they or-won't-they dilemma—where couples as clearly in love as Ross-and-Rachel, Sam-and-Diane, or Jim-and-Pam were prevented from jumping into bed together for years, as the writers forced them through increasingly tight narrative hoops.

These days, though, it seems like more and more TV couples just will. As writer-producers have sought to surprise the audience, they’re puncturing romantic tropes in the process.

Over at The Daily Beast, you can read my latest feature, "The Death of Will-They-or-Won't-They," for which I talk to Community’s Dan Harmon, Parks and Recreation’s Mike Schur and Greg Daniels, and Bones’ Hart Hanson about how TV is throwing off that age-old will-they-or-won’t-they paradigm in the post-Jim-and-Pam era.