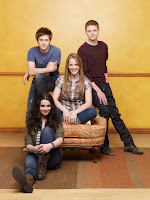 And now for something different. I'm definitely not within ABC Family's target demographic, but I've fallen head over heels in love with the cable network's drama Switched at Birth, which is a profound and reflective exploration of communication, identity, and self-expression.

Over at The Daily Beast, you can read my latest feature, entitled "Switched at Birth: ABC Family’s Groundbreaking Deaf/Hearing Drama," in which I take a look at the teen soap, which explores self-expression and the communication gulf between the hearing and deaf communities, and talk to creator Lizzy Weiss and stars Katie Leclerc, Sean Berdy, and Marlee Matlin.

When Marlee Matlin walked away with an Academy Award for her heart-wrenching turn as a deaf custodian in 1986’s romantic drama Children of a Lesser God, it seemed as though film had finally encountered a definitive depiction of a deaf individual and the often tenuous relationship between the hearing and the deaf worlds. Television has lagged behind; nearly 30 years later, most TV shows still typically shove deaf characters into the background or use them as props as part of a hearing person’s story.


Switched at Birth reverses that course. On the surface, the teen soap, which launched on ABC Family last summer, appears to revolve around two teenage girls (Vanessa Marano, Katie Leclerc) who discover that they were switched at birth as their families—a wealthy white couple (D.W. Moffett, Lea Thompson) and a Latina recovering-alcoholic hairdresser (Constance Marie)—attempt to untangle the emotional Gordian knot in which they’ve found themselves.

Unexpectedly, the show delves deep. Created by Lizzy Weiss (Blue Crush), Switched at Birth—which airs Tuesday evenings at 8 p.m.—offers a deft and intelligent take on the way in which we form our identities through self-expression, whether that be street art, spoken/signed communication, texting, or open dialogue among family members and individuals, as well as the communication gulf between the hearing and deaf/hard-of-hearing communities. It’s also a show that doesn’t pander to its presumed audience. Semantics—“deaf” and “hard-of-hearing” are OK; “hearing-impaired” is not—and ethical implications, as well as morality and choice, are discussed frankly and without preaching.