The Daily Beast: "Parenthood: In Praise of Season 4, Monica Potter, and More" 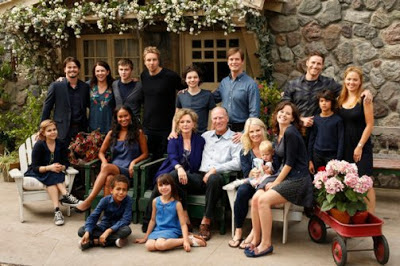 Following the conclusion of the show’s fourth season, I examine NBC’s underrated Parenthood and offer why television needs a fifth season of this remarkable drama.

Over at The Daily Beast, you can read my latest feature, "Parenthood: In Praise of Season 4, Monica Potter, and More," in which I sum up my feelings about the fourth season of NBC's Parenthood and praise the show's subtlety and bravery.

Dry your eyes: it’s time to celebrate this season of NBC’s Parenthood, not to mourn it.

The show’s fourth season, which concluded Tuesday night, was arguably its best to date, one that captured the emotional highs and lows of family life with bravery, subtlety, and realism. Overall, Season 4 was both somber and uplifting—often at the same time—depicting and playing with the notion of change, as seen through the adults and children of the sprawling Braverman family. Change, as we know, comes in many forms: from the pangs of puberty and the leap into adulthood to the inexorable idea of death, one that hovered over the season.

This was a brilliant 13-episode run on a drama that only gets better with age, one that gave each member of the Braverman clan some substantive and emotional plots to work through, from the cancer diagnosis faced by Kristina (Monica Potter) and the struggle between Julia (Erika Christensen) and adopted son Victor (Xolo Mariduena) to the romantic tug-of-war between Sarah (Lauren Graham), Mark (Jason Ritter), and Hank (Ray Romano), and the tumultuous relationship between Amber (Mae Whitman) and Afghan-war vet Ryan (Matt Lauria).

It is no easy feat to balance the emotional needs of so many characters, but creator Jason Katims and his talented writing staff manage to do just that. Multiple subplots are woven through each episode, resulting in unexpected character configurations and pairings. (Who would have thought that a Crosby/Julia scene would carry such weight, as it did last week?) Yet, despite the presence of a cancer story line, the season never meandered into the territory of the saccharine but lightened any semblance of sentimentality with humor and wit. If you need proof of that, you need look no further than the puberty discussion enacted by Max (Max Burkholder); where other shows would have turned toward the after-school-special approach, Parenthood embraced both Max’s Asperger’s and a frank discussion of the changes the male teenager undergoes during that transformation.

In fact, it’s Kristina and Max’s relationship that yields some of the greatest rewards this season, delivering some stunning scenes between mother and son. Here, the writing staff is wise to depict the slightest movement of Max’s emotional life as something triumphant and huge; a scene in which he asks his ailing mother to teach him how to dance is as huge as a gravity-free space jump.