The Daily Beast: "Mad Men Season Premiere: Matthew Weiner on the ‘The Doorway,' and More" 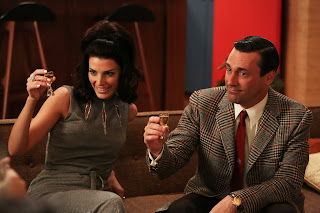 Over at The Daily Beast, you can read my latest feature, "Mad Men Season Premiere: Matthew Weiner on the ‘The Doorway,' and More," in which I talk to Mad Men creator Matthew Weiner about the sixth season opener ("The Doorway") and some of the themes, questions, and characters within.

“Midway in our life’s journey, I went astray from the straight road and woke to find myself alone in a dark wood.”

Mad Men’s sixth season started with a bang, with the season opener (”The Doorway”) offering us a look into the psyche of Don Draper (Jon Hamm), flitting between a doorman’s near brush with death, the weight of mortality, and the bliss of paradise, in this case the hot, white light of Hawaii. Throughout the two-hour opener, a jumping-off point for issues of life and death, characters took on complex examinations of identity and perception in an installment that managed to be lyrical and darkly existential.

The Daily Beast spoke to Mad Men creator Matthew Weiner, who is currently directing the season finale, to discuss Don’s quest for peace and his relationship with Megan (Jessica Paré), the transformation of Betty Francis (January Jones), the new role of Peggy Olson (Elisabeth Moss), that bizarre rape joke, and more. What follows is an edited transcript of the conversation.

The episode begins with Jonesy (Ray Abruzzo) suffering a heart attack, then shifts to Hawaii, where Don doesn’t speak aloud for eight minutes. What was behind your decision to open the season this way?

The idea was that it opens up with this heart attack, and its point of view is that Don is dead and that he is in some kind of state of paradise or maybe hell, or wherever you go—limbo, purgatory. I wanted to show him experiencing life around him and trying to get the mood of what paradise is, what Hawaii is. The idea was that you don’t know what state he’s in. It’s not mystery for mystery’s sake. It’s supposed to create a mood, actually paying attention to the ocean and the people having the party, and Megan with all of her joy.