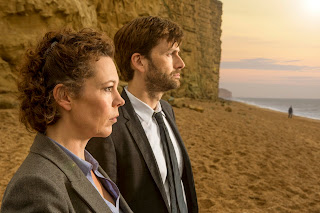 The BAFTA-winning actress stars opposite David Tennant in BBC America’s spellbinding murder mystery Broadchurch. She talks about jumping from comedy to drama, Peep Show, working with David Tennant and Matt Smith, and more.

At BuzzFeed, you can read my latest feature, "Broadchurch: Olivia Colman Is Britain’s 'Finest Export,'" in which I interview the incomparable Olivia Colman, who stars in the sensational British murder mystery Broadchurch﻿ — which heads Stateside to BBC America﻿ on Wednesday evening — about Peep Show﻿, David Tennant﻿, ricocheting between comedy and drama, and more.

Olivia Colman is late to our interview.

A nervous publicist explains that the star of Broadchurch, which plunged the U.K. into a full-blown obsession when it aired earlier this year, is making her way on foot to our location, deep within the caverns of the Beverly Hilton Hotel in Beverly Hills. (Colman is slated to appear to next day on a panel for BBC America at the Television Critics Association summer press tour.) When Colman does turn up, she’s barefoot, clutching a pair of wickedly high-heeled Louboutins in her arms and apologizing for her tardiness.
Apparently, the BAFTA winner — who stars opposite David Tennant in BBC America’s murder mystery Broadchurch, which begins Wednesday, August 7 (it aired earlier this year to huge ratings on ITV in the U.K.), and can be seen in everything from Tyrannosaur to Peep Show — can do comedy and drama well, but finds walking in heels a real challenge. (It may be her rare flaw, in fact.) Hugs, however, are something she excels at. Colman and Doctor Who star Matt Smith embrace briefly as she passes by him, shoes in tow; she appeared in Smith’s very first Doctor Who episode (“The Eleventh Hour”).

“She’s amazing,” Smith tells me. “She’s great fun. Especially when you go and have a beer with her. She’s a riot.” And no one, I say, can cry like her. “Yeah, no one! And as a comedy actress as well, she’s incredible. She’s one of our finest exports.”

Colman is, in fact, a cottage industry unto herself, turning out highly nuanced performances from both ends of the comedy/drama divide. The Telegraph called her “the next Judi Dench.” Meryl Streep referred to her as “divinely gifted.” But Colman doesn’t wear those accolades comfortably. Bring them up and she laughs uneasily.

“It all seems a bit silly, doesn’t it? I did rewind the Meryl bit quite a few times,” Colman says, shifting in her chair. “That was amazing. I don’t know. It’s lovely and I’m aware that I’m lucky and there are many, many people who can do what I do. I’ve just been given an opportunity to do it, and I’m very grateful. It might all dry up. I’m making hay.”