BuzzFeed: What’s Behind Our Obsession With “Too Many Cooks” 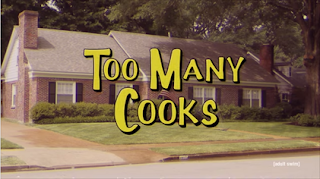 Adult Swim’s surreal satire of sitcoms subverts our expectations of nostalgia. You might be able to go home, but it will never be the same.

"Too Many Cooks" began as an Adult Swim parody that aired on Cartoon Network's late-night block for a week or so at the end of October, but since then, the surreal and twisted 11-minute video has gone viral in a way that even its creators, Chris "Casper" Kelly (Squidbillies) and Paul Painter, have been gobsmacked by. What is it about this short that has exerted such a magnetic pull on so many?

"Too Many Cooks" is, on the surface, initially a parody of 1970s and 1980s sitcoms that once populated the television landscape. These are the types of shows you might recall watching from the couch of your grandparents' house, shows like The Brady Bunch, Three's Company, Family Matters, and Perfect Strangers with their familiar theme songs and title sequences, once hallmarks of the sitcom form. They're insidiously comfortable in a way; it's often impossible to watch just one of these. Networks wisely capitalized on this, building entire programming blocks around anodyne shows — many of which were family comedies — that were, in their ways, almost identical to one another. There's a setup, a beat, a punch line. Cue the laugh track and pause. There's a cheer when a beloved character enters the room, an audible and predictable reaction whenever a character kisses another or when a character gets in trouble or puts another in their place.

This is the communal language of television; we all know and understand these cues instinctively — know when to laugh, when to grimace, when to cheer. On "Too Many Cooks," it may not be exactly Family Matters or Perfect Strangers that you're reminded of, but an infinite number of other, similarly structured sitcoms that are recognizable callbacks to a very different time in comedies. It's a conceptual lure, rather than a specific one, that "Too Many Cooks" casts out, capturing an era before the rise of single-cams and the eradication of theme songs and title sequences. It was still a time where everybody knew your name and, as the song tells us, they were always glad you came. Where the actors would stop what they were doing and look up and smile at the camera, a literal welcome to the viewer, a psychological semaphore waving right at you, the actor's name emblazoned in yellow beneath their toothy glare. Because it's part of our pop culture DNA, we know instinctively what this signals and what it represents. It is pure bubble gum nostalgia, saccharine and devoid of calories, and that look of false acknowledgement toward the viewer makes us complicit in what it's selling.