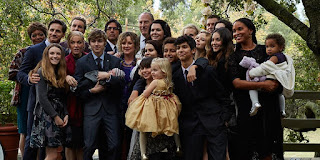 It couldn't be more fitting that Parenthood, which wrapped up its six-season run on Jan. 29, ended with a baseball game. The pilot episode of the Jason Katims-created show (very loosely based on the 1989 feature film) ended in the same fashion: After a negative experience, Max Braverman (Max Burkholder) doesn't initially want to play in his baseball game, but when he changes his mind, the entire Braverman clan races to get him there in time.

There's a beautiful sense of symmetry, therefore, to how Parenthood's final episode ended, with the Bravermans uniting to celebrate one of their own, Zeek (Craig T. Nelson), on the baseball diamond, fulfilling his wishes and bringing each other closer together in the process. With the series bookended both by the most American of sports — Crosby (Dax Shepard) once refers to baseball as the Bravermans' "religion" — and by Sarah (Lauren Graham) finding her true place (moving in with her parents in the pilot and finally getting the happy ending she deserves), Parenthood gave its audience the narrative equivalent of a home run with all the bases loaded.

And that final six-minute sequence at the end of Parenthood's series finale (called, fittingly, "May God Bless and Keep You Always," the first lyric of Bob Dylan's "Forever Young," the show's theme song) might just be one of the most gorgeous scenes ever to air on television. As the family gathers to pay their last respects to Zeek, felled by a Chekhovian heart attack in the final 10 minutes of the series, they do exactly as he once asked — to have his ashes scattered over center field of Marine Park and to have his family play a game of baseball over him. It's a somber but also joyous scene of connection in a series that has ultimately been about the ways in which we forge bonds with our loved ones and about how love grows and changes and is tested over time.

Parenthood has always been about taking small moments and making them instantly indelible — there's a reason why this drama affects many of us the way that it does, how it can violently yank on our heartstrings by transforming the most insignificant moment into something profound and poignant. Think of Kristina (Monica Potter) dancing with Max or climbing in that backseat to comfort her son. Or Zeek, standing over the wreckage of a car, telling Amber (Mae Whitman) that she's destroying his dream, the dream that he fought for. Or any of the family dinners in which the Bravermans came together, bickered, drank, and danced. We see this Berkeley clan at their best and worst, but these are the moments that add up to capturing a certain American family experience today.