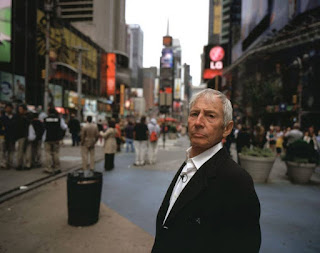 The Jinx: The Life and Deaths of Robert Durst, like Sarah Koenig's beloved podcast, sifts through old documents, finds new leads from fresh interviews, and seeks to determine just what happened on a fateful day in which the most foul murder was committed. And, also like Serial before it, The Jinxmay also hold no ultimate answer to innocence or guilt. But that seems almost beside the point; such investigations often remain murky and unclear, and guilt is not so easy a thing to be judged.

Instead, this upcoming six-part tantalizing murder mystery, from director Andrew Jarecki (Capturing the Friedmans), is a gripping true crime story that unfolds with all of the speed of a page-turner; it's breathless and terrifying and obsession-inducing.

If you grew up in New York at a certain point in time (or saw Jarecki's 2010 feature film All Good Things), you may be familiar with Robert Durst, the shark-eyed heir to a vast Manhattan real estate empire and the prime suspect in the disappearance of his socialite wife, Kathleen, who went missing in 1982 and whose body was never recovered. (Durst maintains his innocence to this day.) And yet that's not the strangest facet of The Jinx, which begins not with the sensational disappearance of Kathleen but, rather, the 2001 murder and dismemberment of an elderly man in Galveston, Texas. The person accused of this crime? His neighbor, Robert Durst, who was later captured in Pennsylvania after trying to steal a hoagie from a Wegmans supermarket, despite the fact that he had $500 in cash on him and more than $30,000 in his car.

The Jinx opens as most murder mysteries do: with the discovery of a body. But, in this case, it's actually a body part. A local young Texan finds an unidentified torso floating in Galveston Bay and contacts law enforcement officials, who later recover several bags of mutilated body parts belonging to the same body — that of an elderly man. The victim's head is missing, but police are able to piece together his identity, thanks to a newspaper found among the carnage addressed to a Morris Black. What follows next is nothing less than perplexing — a crumbling apartment building, blood spatter concealed under kitchen linoleum, and the discovery of Morris' "deaf-mute" neighbor, a woman who, supposedly, is frequently away traveling. Though the landlord of Morris' building claims to have met this woman, describing her as "flat-chested" and "ugly," her meager apartment is largely devoid of anything that would indicate a female presence. As the police quickly discover, that is because "she" is merely a cover for the true occupant, Robert Durst, who, in spite of his real estate fortune, has been living in a cheap Galveston apartment for reasons unknown.

The confounding and remarkable mysteries of The Jinx bring to mind not only Serial, but other crime documentaries, such as Jean-Xavier de Lestrade's gripping true crime masterpiece The Staircase. But what sets this one apart is its stunning aesthetic. The Jinx is gorgeously filmed, with an auteur's eye for staging — there are some truly haunting images that thread their way through the series, visuals that are captured in the evocative title sequence, which evokes the wildly popular HBO crime thriller True Detective and is set to Eels' throbbing song "Fresh Blood." We see a woman fall from a roof in slow-motion, her hair a Magritte-like shroud around her; a line of perfect mannequins stare outward, their wigs situated just so; and then there's the title itself, The Jinx, its X lingering onscreen after the other letters have faded away. Like the title sequence, the series is essentially the search for meaning among events that seem so unlikely, so impossible, that they beg credulity. And yet that's the crazy thing: Truth can sometimes be so much stranger, so much scarier, than anything invented or imagined.