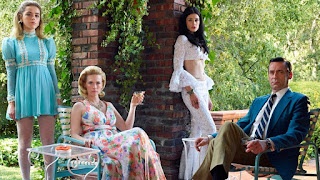 The creative force behind the period drama talks about where his characters are as his show begins its final episodes.

“We left off with everyone’s material needs being met in an extreme way,” says Mad Men creator Matthew Weiner of where we last saw the characters on his critically acclaimed period drama when the show went on hiatus 10 months ago. “Then the issue is, what else is there?”

That is the central question with the return to US TV of the AMC hit, one demanding to be answered by both the show’s characters, and its creator whose success is the envy of the television industry.

Mad Men has been a defining part of Weiner’s life for the last 15 years. He wrote the pilot script on spec while he was a staff writer on CBS’ Ted Danson sitcom Becker in 1999, using it to land a writing gig on HBO’s The Sopranos in 2002. It would take another five years, filled with multiple rejections, before the first episode of Mad Men would make it on the air.

Someone with less determination or vision might have given up, or taken an easier path. Fear and regret thread their way through this week’s mid-season premiere of Mad Men, titled Severance, which examines “the life not lived” for several characters, including Don Draper (Jon Hamm), Peggy Olson (Elisabeth Moss), Joan Harris (Christina Hendricks) and Ken Cosgrove (Aaron Stanton). It’s only fitting that Peggy Lee’s 1969 song Is That All There Is? provides the soundtrack.

The leaders of ad agency Sterling Cooper & Partners have received a windfall in the time between last year’s finale and Severance, the result of the firm’s sale to rival McCann Erickson. But that wealth doesn’t mean each of the characters is satisfied with what they have. That conflict between fulfillment and disappointment powers the episode. And it’s a theme that resonates deeply for Weiner, who spoke on the phone to BBC Culture about Severance and shares just how closely the episode, and Mad Men, springs from his personal experience.

What could have been

In Severance, Don has a vivid dream of his former lover, Rachel Katz (Maggie Siff), and learns that she has died; he then meets a waitress, Diana (Elizabeth Reaser), whom he feels he already knows. Ken is pushed to quit his job and fulfill his long-standing dream to be a novelist; but when he’s fired instead, he can’t let it go. Joan returns to the department store where she once worked but, when recognised, pretends to be someone else. Peggy impulsively decides to fly to Paris with a stranger (Devon Gummersall), but can’t remember where she left her passport. The audience is left to contemplate whether these occurrences are mere coincidences – did Don just happen to dream of Rachel after her death or did he often dream of her? – or signs of something deeper.