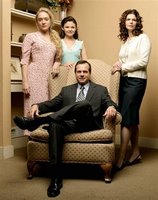 The news comes as the series, about a polygamist and his three wives and their family, hits its halfway point this week. Production on the second season of Big Love will begin in August, with the second season expected to air on HBO sometime in 2007.

However, it is doubtful that Big Love will be paired with its current lead-in, The Sopranos, which will air its final eight episodes beginning in January 2007. Big Love is expected to return later that year, possibly in The Sopranos' current 9 pm timeslot on Sundays.

As for the early pickup, HBO president of entertainment Carolyn Strauss told the Hollywood Reporter, "We all just felt the show was really solid and only getting better... It's gathering momentum with subscribers and critics."

And with me, as I've become obsessed with the Henrickson clan. Let's just hope that HBO is better with the budget than Nicki.

As the saying goes, if you can't stand the heat...

With only two installments remaining of the botched week-long stunt Celebrity Cooking Showdown (so bad it was just plain bad), NBC shelved the reality series yesterday, deciding instead to show the two final episodes on website NBC.com rather than air them. (UPDATE: The two remaining episodes will also air back-to-back on Saturday evening on NBC.)

The cancellation comes after the series' worse performance to date. The episode that aired Wednesday evening placed a distant fifth among adults 18-49, according to The Futon Critic, with only the WB's on-the-bubble teen drama One Tree Hill pulling in less viewers in the key demo.

After revitalizing the Mission: Impossible, MI:3 director J.J. Abrams has been hired by Paramount to breathe some new life into another film franchise, namely long-dormant Star Trek. Variety is reporting that Abrams, creator of Felicity, Alias, and Lost, has been locked to produce an eleventh Trek outing.

While there is no deal in place currently for Abrams to direct the next Star Trek film (though apparently Abrams isn't ruling it out either), he will co-write the script with MI:3 (and former Alias) scribes Alex Kurtzman and Roberto Orci. Variety also infers that the film will be produced by Abrams' producing team, which includes Lost's Damon Lindelof and Bryan Burk.

It is believed that the plot of Abrams' Trek film will center on younger versions of the seminal characters of James Kirk and Spock, their first meeting at the Starfleet Academy, and first mission.

Variety is reporting that rock icon Mick Jagger is in negotiations for an ABC pilot about some blue-collar thieves who plot the robbery of a celebrity. Jagger would play the heist's target, a.k.a himself.

Taking a page from Being John Malkovitch, the currently untitled project was formerly known as I Want to Rob Jeff Goldblum, but Jeff Goldblum has his own pilot at over at rival network NBC. Jagger was instead chosen as the celebrity in question after the script received a pilot order last year.

However, Jagger would appear in only several of the pilot's scenes, and--unlike Goldblum, the show's original target--his name is not expected to appear in the title. Should the pilot be picked up to series, Jagger would be expected to film scenes as the plot builds towards the robbery.

Judging from the show's premise, something tells me that won't even be an issue. 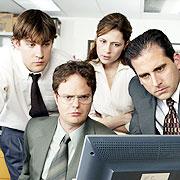 Yesterday, NBC announced their schedule for May sweeps and I was surprised and excited to see that it includes a special supersized season finale of The Office.

Scheduled to air on May 11th (from 9:20-10:00 pm), The Office's plus-sized season finale is written by star Steve Carrell and will run 40 minutes, instead of their usual 30-minute timeslot (well, with commercials, anyway--take those out and the writers only usually have 20 minutes to work with). According to NBC's press release, the episode ("Casino Night") will focus on Michael (Steve Carell) organizing a charity Casino Night for the Dunder Mifflin employees in the warehouse.

Thank you, NBC! (It almost makes up for you forcing Celebrity Cooking Challenge on the public... well, almost.) Ten extra minutes of Office goodness... and ten webisodes this summer!

The news makes being in my own office nearly bearable.

Looks like I'll be settling in with my favorite fake psychic Shirley "Shushy" Ghostman, the psychotic denizens of Little Britain, and some plasticine animals with human voices on Creature Comforts. Should be quite an evening.

My love affair with Doctor Who continues. On tonight's episode ("The Long Game"), the gang travels to the future, where new companion Adam--he joined Rose and the Doctor last episode--comes to the conclusion that journeying with a Time Lord is never safe or easy. If he's not looking for danger, he might want to stay home then watching Creature Comforts instead.

Brock said…
I need to catch up on several episodes of BIG LOVE. I got into the first few but sort of started to flounder for the last episode that I watched. But with three episodes remaining on my tivo, word on the street, and the recent HBO pickup, I think I'm in store for a quality marathon of messed up families. Big Love is the Mormon version of Six Feet Under, but less depressing. I look forward to watching the rest of the season... as soon as I come up for air.
4/21/2006

Brock said…
Mick Jagger as tv star? I can't believe the amount of talent on the airwaves next season (if their shows get picked up)... Ray Liotta, Virginia Madsen (those two in one show), among others. As long as quality shows continue to getting picked up, we can look forward to a great 2006/2007 tv season.
4/21/2006

Anonymous said…
Big HURRAH for "Big Love." I can't wait for season two. (Hysterical comment about Nicki and the budget, by the way.) And I'm definitely looking forward to the super-sized "Office" as well. Is there anything that Steve Carrell can't do?
4/21/2006