I wasn't quite sure what to expect when I tuned in last night to the Travel Channel's new show, 5 Takes: Pacific Rim, having missed the first season of the 5 Takes franchise. What I discovered however was a cross between a travelogue, MTV's The Real World, and a daring example of truly intereactive television. But more on that later.

First, here's the skinny on the show itself. Five 20-something strangers are selected by the Travel Channel to take an amazing 13-week journey--armed with only $50 a day and crammed into a single hotel room--and have every second of the trip filmed. They'll participate in video diaries and blog-writing as they explore, eat, drink, dance, and experience a number of locations along the way.

In fact, it's those very locations that provide one of the more interesting twists of the show. Viewers can log onto the 5 Takes website and make suggestions about where the gang should go next (will it be Melbourne or Canberra?), where they should stay, and what activites they should participate in. It's truly interactive television. The first episode, which aired last night, was filmed only last week, which gives viewers the very real ability to influence the show and guide the gang along the way. It's a novel twist to the tried-and-true travel format and immediately connects the viewer--whether they ever log on and offer suggestions or not--and lends the show a sense of immediacy and surprise.

In last night's episode ("Sydney")--the first of the 5 Takes: Pacific Rim series--the travel journalists (or "TJs" as the overbearing narrator very obnoxiously keep referring to them as) attempt to surf at the world famous Bondi Beach, go to a life drawing class at a pub (one of the gang even strips and takes a turn as a nude life model), take a tour of the Sydney Opera House, go bar-hopping, get up-close-and-personal with koalas and kangaroos at the zoo, wake up before dawn to go on a fishing expedition, and end their brief time in Sydney by cooking up what they caught at a BBQ on the rooftop of their hostel.

They'll also have the opportunity to do something amazing each week that their meagre allowances couldn't cover... if they can rise to a challenge set forth by the Travel Channel. This week's challenge--the prize of which was to climb the awe-inspiring Sydney Harbour Bridge--was to locate a word written somewhere in Sydney, its significance, and its link to the city. After two days of searching, the gang finally answered the question correctly (the word was "Eternity," it was placed on the Harbour Bridge for the 2000 Olympics, and symbolized the past, present, and future for Sydney at the millenium) and won a chance to climb the bridge and have a truly beautiful view of a gorgeous city.

Which brings us to the travelers themselves (I can't bare to refer to them as TJs. Sorry, Travel 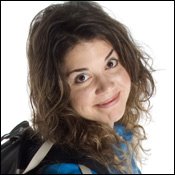 Channel). My favorite thus far is the 24-year-old Colorado native, Gabe, a radio DJ and former member of Up with People, a world-travelling theatrical troupe. He's the food/music guy on the trip and his sense of wonder and appreciation is a joy to watch. Gabe is also, at least at the outset, the most natural of the group in front of the camera and wasn't afraid to admit--and conquer--his fear of heights in the first episode. As the premiere episode went on, I also began to like Renee (right), the 23-year-old artist and teacher from New York who is the group's self-proclaimed culture vulture. She initially freaked me out with her sqealing upon arriving in Sydney. However, I connected with Renee more as the episode went on. Her apparent crush on Gabe is hilarious to watch; I'm not sure she quite realizes her apparent feelings yet.

Oh, and I can't get enough of Tony as well... he's the D.C. bartender who doffs his clothes to model at the life drawing class... and wasn't too bothered that Renee was looking on. I can't say much about Tiffany, a free spirit who has been the most low-key of the group so far. She's the spirituality/nature traveller and other than seeing her snuggle up to a koala at the zoo, she seemed to only come alive at the end of the episode, when she and Gabe cooked up the crabs they had caught that morning. 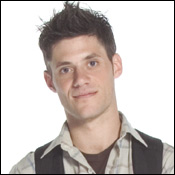 Then there's Josh (left), an aspiring filmmaker living in Los Angeles. Personally, I can't stand him and was thrilled to see him tormented on the bus when a Sydney local referred to him as a tosser, a simpleton, and a poser. It didn't help that Josh was riding the bus without a shirt on, wearing a bandana, carrying a surfboard, and talking trash about the waves he was going to surf at Bondi. (And then it was even more hilarious when he couldn't catch a wave. You've got to love comeuppance.) Everything about Josh is over-the-top and forced, from his many colored scarves/bandanas to the way he asked the docent at the Sydney Opera House if Metallica ever play there.

But even if Josh continues to annoy me, I'm pretty much already hooked on 5 Takes: Pacific Rim already and will follow these kids anywhere. Of course, it helps that I've got some say in where they're headed.

Finally, the long wait is over as tonight the soon-to-be-demolished WB brings us a brand-new episode of Gilmore Girls. On tonight's episode ("I'm OK, You're OK"), Rory visits Lorelai at home in Stars Hollow, where she sees firsthand how upset Lorelai is about Luke and his new-found daughter. Meanwhile, Zack, who recently proposed to Lane, asks Mrs. Kim for permission to marry her daughter. Hmmm, not much to go on there. It better be a good episode, that's all I can say...

Okay, yes, I already caught the episode ("The Rapes of Graff") last week, but who can pass up the chance to see Veronica pal around with Michael Cera and Alia Shawkat from the dearly-departed Arrested Development? And if you didn't catch the episode the last time around, here's your chance, now in Veronica Mars' new timeslot. (Don't forget: new episode tomorrow, then come back Tuesdays at 9 pm for new episodes.)

What I won't be watching is Pepper Dennis on the WB. I had the pleasure (or rather, should I say displeasure) of watching the pilot for Pepper Dennis last summer and found it unwatchable. Really, just dreadful.... a bad throwback to even worse 1980s dramas about women who dare work and the men they love. Shudder. This Pepper has no spice whatsoever; it's nothing more than a rotten tomato.

Brock said…
My friend works on "5 Takes." It seems like such a great show, something similiar to an idea I came up with a few years ago. I need to give that show a chance.
4/05/2006

Jace Lacob said…
You have to watch the show. It's such a fantastic format and the travelers aren't obnoxious like they would be if MTV made the show. It repeats a zillion times, I believe, so you should definitely check it out.
4/05/2006