Bluths to Get "Arrested" on the Big Screen? 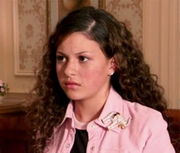 In an interview about her upcoming Lifetime Original Movie, Not Like Everybody Else (premiering tonight at 9 pm ET/PT), Shawkat said, "Mitch actually recently told us that there is a good possibility for a movie, and that he's talking to Ron Howard about it."

(So there's hope yet for Arrested fans to see some continuing adventures of the Bluth Family.)

As for that other burning question: Will Shawkat and fellow Arrested alum Michael Cera (George Michael Bluth) be returning to Veronica Mars?

According to Shawkat: "The creator [Rob Thomas] was a huge fan of Arrested, and he told us that he would love to have us back. But I know that Michael is busy and I'm in Vancouver right now, and we haven't officially been approached about anything. But it was fun to do."

Rob Thomas, if you're listening, there's a whole slew of still-grieving Bluth fans who would love it if Veronica Mars could sooth the loss of Maeby and George Michael. Well, at least until that Arrested Development movie gets going...

Brock said…
It's a shame that she and Michael Cera will be busy. I was hoping that they would definitely join the Veronica Mars cast full-time, rather than just be a possible guest star.

As for Arrested Development movie, hopefully it would have the similar rhythm and cadences as the tv show. But on the other hand, hopefully it would be more than just a supersized version of the series, which is what worries me about The Simpsons movie (though not 24).
7/10/2006

ticknart said…
My big question: will the Arrested people do the obvious thing and include a sub plot of Maeby working with Ron Howard to make the a movie about the Bluths?
7/10/2006

Anonymous said…
The big question is "Will anybody see it in the theatre?"

A lot of people didn't see Serenity and that really puts a damper of Arrested Devolpments chances.
7/11/2006