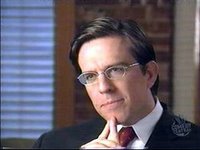 The Office is getting a few new workers.

The Hollywood Reporter has announced that three actors have joined the expansive cast of NBC's The Office next season. Charles Esten (Whose Line Is It Anyway?) will reprise his role of Josh Porter, last seen in the "Valentine's Day" episode last season; his character is the regional manager of Dunder-Mifflin's Stamford branch. Meanwhile, Rashida Jones (Boston Public) and Steve Carell's former Daily Show compatriot Ed Helms have joined the cast. Both will play employees of Dunder-Mifflin, with Jones landing a "potential recurring role" on the series.

While Helms and Jones (coincidentally Office co-star John Krasinski's girlfriend) were said to be playing workers in the Scranton office in The Hollywood Reporter, it seems more than likely that they will instead be corporate drones of the paper manufacturer's Stamford branch. (In fact, it seems a dead certainty, given the appearance of Josh Porter, the Stamford branch's regional manager, in the announcement.

All of which lends credence to my thoughts last May that poor, lovelorn Jim Halpert (John Krasinksi) would accept the transfer from Scranton that Jan Levinson (Melora Hardin) offered him in the season finale ("Casino Night"), following his kiss with Pam (Jenna Fischer).

So is it curtains for these two lovebirds? Tune in to the third season of The Office to find out... 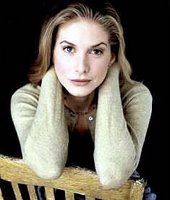 In other casting news, yet another castaway has joined the cast of ABC's Lost, following the recent announcement that Brazilian actor Rodrigo Santoro had been cast in the series as well. Elizabeth Mitchell (ER) will join the drama series next season.

No information was immediately released about her character Juliet, said to be a possible love interest for Matthew Fox's character.

I'm all for more romance on Lost and, just as long as that mysterious smoky "monster" doesn't end up named Romeo, we should be fine.

It's the season finale of my new favorite British comedy, Spaced, a wacky 1999 Britcom starring Shaun of the Dead's Simon Pegg and Jessica Stevenson. On tonight's episode ("Ends"), Tim's ex-girlfriend Sarah (Monarch of the Glen's Anna Wilson-Jones) wants to give their failed relationship a second chance, but Daisy and Mike are less thrilled by the news than Tim is. Meanwhile, Mike is re-evaluated for the territorial army. Hmmm, maybe he knows Gareth...

One of my favorite single-camera British comedies returns Stateside for a second season of twisted and bizarre episodes. On tonight's special hour-long season finale, Jeremy and his girlfriend Nancy (Rachel Blanchard) are planning on getting married so Nancy can get a visa, but Mark will do anything to prevent them from walking down the aisle. (That Mark, such a plonker.)