Pegg and Frost Shoot Up in "Hot Fuzz" 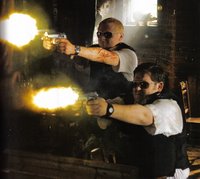 Okay, so it's not totally a television-related post, but I've been dearly missing Spaced, one of my favorite Britcoms lately and needed a Simon Pegg/Nick Frost fix.

I ran into Simon back in August at a BAFTA/LA event and he was thrilled that someone over here in the States had even heard of his upcoming feature Hot Fuzz, let alone was excited to see it.

Personally, I can't wait and might even have to fly over to England to see it when it's released over there on February 16th. As for those of us Stateside looking for a companion piece to Simon Pegg and Edgar Wright's follow-up to the gleefully gory Shaun of the Dead, the current release date is scheduled for March 9th.

In the meantime, you can check out the teaser trailer for Hot Fuzz on You Tube here and here and the Working Title official site features video blogs from Pegg and Wright et al.

While it's not Spaced (and BBC America STILL hasn't told us when we're getting Season Two), it's enough to tide me over for now.