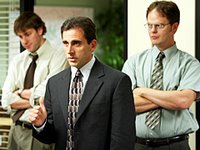 Looks like the gang at Dunder Mifflin will be sticking around for a little longer this week... online anyway.

No word on whether these producer's cut versions will also eventually make their way to iTunes or if the availability is limited to streaming them over the Peacock's website. Since last year, The Office has always been in touch with its online fan base; it was one of the first series last Decemeber to be offered for download through iTunes' Music Store and NBC offered a series of ten webisodes featuring Angela, Oscar, and Kevin ("The Accountants") over the summer on its web site.

I'm always curious to see what DOESN'T make it into each episode of The Office and the Season Two DVD has proven an enlightening comedy tool to gauge what ended up on the cutting room floor (sometimes the extra material is hysterical; other times it's flat and apparent why it was cut). "Branch Closing" is said to be a status quo-altering episode for the Dunder-Mifflin gang so it will be very interesting to see those moments that fell through the (edited) cracks.

Anonymous said…
Unlike a lot of shows, "The Office" deleted scenes are usually pretty funny. I always enjoy watching them on the DVDs.
11/07/2006