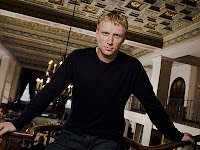 Things are not looking too good for Dan Vassar.

NBC had until yesterday to give a full-season pickup to its time-travel drama Journeyman but instead quietly let the option lapse, a move which has likely all but killed the Kevin McKidd-starring drama about a family man who discovers that he can travel to the past, where he encounters his dead fiancee, who also happens to be a traveler.

Journeyman did manage to complete production on its 13-episode initial order and the Peacock plans to air the final two installments next week (Monday and Wednesday evenings, if you're keeping score).

The jury is still out on the fate of Bionic Woman, the last of NBC's freshmen dramas launched at the start of the 2007-08 season. A relaunch of the series, a two-parter planned for January, has been scuttled due to the strike. I don't anticipate this series coming back from limbo, so Bionic Woman fans, prepare to say farewell to Jaime Sommers.

Elsewhere, ABC has yanked freshman drama Big Shots off of its schedule, effective immediately, and will instead fill the timeslot with repeats of Grey's Anatomy spin-off Private Practice.

It is not known if or when struggling drama Big Shots will return to ABC's schedule.

Production on the series' 13-episode initial order was completed and Big Shots still has five episodes in the can, so I'd imagine once ABC starts running low on first-run scripted programming, they could air these episodes as a backup.

Anonymous said…
That's a shame. I really liked Journeyman even if it wasn't perfect. I thought that Kevin McKidd was great and how can you not fall for Reed Diamond?

Anonymous said…
I have to say that I saw Journeyman's fate (even without being able to travel through time) but it's still too bad. It was an interesting concept but never quite pulled it all together.
12/12/2007

Danielle C.F. Maris said…
I wish Bionic Woman had lived up to its potential. I think it could have been a really fun show. I liked the pilot but, after that, it seemed really inconsistent.

rockauteur said…
Journeyman was my favorite show of the new season. While I was a it ambivalent about the pilot (though I loved the ending), the series became really strong in the last 5 episodes, and added a greater mythological element that had me at the edge of my seat... well, couch. I am so sad it never caught on.
12/12/2007

rockauteur said…
Big Shots will be back for its last 5 episodes. In light of the strike, we haven't seen the last of that show.
12/12/2007

Unknown said…
We stopped watching Journeyman after about three eps, so no loss for me. At the other end of the spectrum, I'm ecstatic they've picked up Chuck! And another mood swing when I found Bionic Woman is likely to be dropped. I didn't think I'd get into a show that seemed cookie-cut from a number of others, but I've grown quite fond of Michelle Ryan's portrayal of Jaime. Sigh.
12/13/2007

"Big Shots" shouldn't have a present, and definitely has no future.

"Bionic Woman" is/was such a huge disappointment, completely mismanaged from day one. Lots of blame to go around, but I take exception to the bashing that Michelle Ryan is receiving over this fiasco.

BW has no hint of a game plan and almost looks as if they are actually trying to get canceled. It's poorly conceived and written and it's really just a dog's breakfast and I can't see how Michelle is responsible for that, although some will tell you she is.
12/13/2007

Liat said…
Can I say how grateful I am that Life (such a dreadful name!) got a stay of execution. I love it and was so worried b/c no one else I know was watching it.

Bionic woman died on it's casting. I just never related to the actress they chose to be Jaime Sommers so I stopped watching after 3 episodes, despite being a rabid Battlestar Galactica Fan.

And can I mention another show no one talks about - Aliens in America is just delightful. I hope it gets more air time too.
12/14/2007