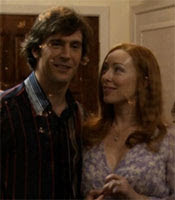 Remember Swingtown, that daring social experiment that CBS developed last year, however incongruous its 1970s suburban swingers might seem with the procedurals that populate the Eye's schedule?

For a while it seemed like the series, which stars Coupling's Jack Davenport, would be a casualty of the WGA strike as production was shut down on the drama early on and only a handful of the series' 13-episode commitment were actually produced.

CBS has now revealed that it will launch Swingtown this summer, rather than during the typical network season. The series will launch on CBS on May 29th.

The move doesn't strike me as being particularly confident. In fact, it seems like CBS just wants to burn off Swingtown during the summer and be done with it.

However, executive producer Carol Barbee told The Hollywood Reporter that she's pleased with the summer scheduling: ""A summer launch is perfect for Swingtown since the pilot takes place on the Bicentennial Fourth of July."

At least someone is taking those lemons and turning them into lemonade... Me, I can't see the particular sweetness of this decision, except for the fact that it gives the series some diminished expectations in terms of ratings. That said, I would be very surprised if the series, from studio CBS Paramount Television, makes it all the way through its run, much less is picked up for a second go-around.

Swingtown, your best bet might just be to leave your keys in the bowl.

Danielle C.F. Maris said…
Although summer scheduling doesn't bode well for Swingtown, it might attract a bigger audience during those sunny months when people are looking for a guilty pleasure to tune in to.
3/05/2008

Anonymous said…
I really wanted to like this show. It has a solid cast and a different premise...sort of a naughty Wonder Years. I did get to see the first episode and, while it didn't quite live up to my expectations, it has potential. I guess I'll have to tune in this summer to check out the second episode and see if it gets any better.
3/05/2008

Anonymous said…
Leave your keys in the bowl....nice. :)

While I didn't think the filmed pilot lived up to the fun script, I was still sucked in by the set decoration and costumes (And awesome hair!). I will be tuning in for at least episode 2.
3/06/2008