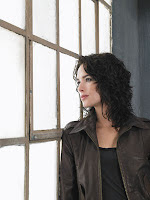 To echo that long-famous quotable, Sarah Connor will be back next season.

Terminator: The Sarah Connor Chronicles was considered a dead cert for a renewal (along with Kelsey Grammer-Patricia Heaton comedy Back to You) at the network, especially as it was the only one of FOX's crop of new series to make any impact creatively or ratings-wise this season.

The drama could also get a back nine order relatively quickly, especially since the McG-helmed Terminator film (starring Christian Bale) will be released theatrically in May. Look for major synergy going on between the TV series and the aforementioned film as FOX continues to mine this franchise for all its worth.

But while The Sarah Connor Chronicles will return this fall rather than mid-season 2009, don't look for it to remain in the Mondays at 9 pm timeslot it occupied earlier this year; Sarah Connor would bound to face tough competition from fellow timeslot opponent Heroes and FOX will definitely be moving it out of the line of fire.

I could see the network launching a night of sci-fi themed programing (as FOX seems to be developing sci-fi like crazy these days), pairing it perhaps with J.J. Abrams' Fringe (also a Warner Bros. Television-produced series) for a two-hour block of adult escapism.

Where would you program The Sarah Connor Chronicles and what would you pair it with? Should FOX reclaim Sunday nights as a home for sci-fi as it so memorably did when The X-Files aired that night of the week? Discuss.

On the twelfth episode of this addictive British import, two couples enter Raymond's latest challenge: to create a singles' night at their respective restaurants and help their customers find love and have a fun, romantic time in the process. But in order to do so they have to fill their restaurant with suitable suitors for the twenty young execs that Raymond has lined up for them, a task easier said than done.

On tonight's installment ("Dead Calm"), Wayne realizes that he might not be able to regain Dahlia's trust when she learns how much he lied to her about what really happened to Pete; Cael and Rosaleen grow closer at the Travelers' camp; Nina throws a party for Jim; and Wayne tries to keep Dale from involving the Travelers in his master plan.

I wouldn't mind seeing them shake up their Sunday schedule but they've kept that pretty solid despite the rest of their schedule having been all over the map in recent seasons. It makes me think they don't want to mess with its success. Personally, I'd love to have any of those shows on Tuesdays but I'll admit that's because I'm lacking good Tuesday night TV not because it makes the most sense for Fox. ;)
4/22/2008

Unknown said…
Now that virtually everyone has a VCR or DVR or buys episodes on iTunes, do network still agonize over what shows to group together on certain nights? I agree they should avoid putting a show up against tough competition because fewer people have multiple VCRs/DVRs, but it seems that pairings should be passe. People record what they want and watch it when they want to.
4/22/2008

Page48 said…
I'm with skst, I don't see the point anymore of worrying about time slots. Whether it's Tivo, timeshifting, or torrent sites, I'll watch whatever I want, whenever I want.

Having said that, in the early days of this decade, I used to love knowing that Sunday nights were all about "Alias" and "X-Files", back to back, the way God intended.
4/22/2008