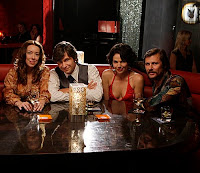 Go on, I'm curious: what did you think of CBS' scripted summer series, Swingtown, a period-set drama about swinging married couples in the 1970s which launched last night on--of all places--the Tiffany network?

I've now seen the pilot episode of Swingtown a few times in the last year since it was first produced and ordered to series. I do think that there is an interesting and intriguing drama opportunity in the Ice Storm-esque setting but I am not at all convinced that CBS with its network standards and practices was the right home for this cheeky and semi-provocative drama. No, this is an HBO- or Showtime-ready series that's slumming it a bit on broadcast television and the setting's innate restrictions renders much of it toothless and lacking in bite.

Does this series need wanton sex and language in order to work? No, but the lack of (for want of a better word) adult realism does take you slightly off page, particularly when the subject matter itself is inherently risque and risky.

I would have written off Swingtown altogether save for the strength of its cast, particularly British import Jack Davenport (Coupling) and the incandescent Molly Parker (Deadwood), along with Grant Show, Lana Parilla, Josh Hopkins, and Miriam Shor.

Ultimately, for a series that promises to be as insightful and steamy as Swingtown, this left me completely cold. I'm willing to check out another episode for hope of some deeper character exploration but right now this is one key party that I'm ready to leave early.

What did you think? Will you absolutely hooked by Swingtown and plan to tune in to next week's episode? Or were you as turned off as Shor's Janet Thompson? Talk back here.

Anonymous said…
I am with you. I really enjoyed the pilot (when I saw it last year!) for its art direction, costumes, hair, mustaches. And I will watch ep 2. But I fear that with it being on CBS, it will become more like Desperate Couples than 70s swingers when it's all said and done.
6/06/2008

Danielle C.F. Maris said…
I wanted to like it for the great cast and risky subject matter but the pilot really felt flat. I'll probably check out the second ep. but don't have very high hopes for it.
6/06/2008

rockauteur said…
the show was awful. almost unwatchable. i felt that the main swinging couple were predators who preyed upon innocent people to corrupt. and didnt know what was going on with the kids storylines at all like the runway girl with the mom addicted to garbage bags.
6/06/2008