Life is For the Living: An Advance Review of the Final Three Episodes of "Pushing Daisies" 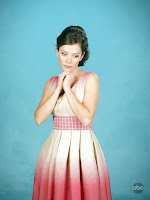 Yesterday, I joined a sold-out crowd at the Cinerama Dome at the Arclight in Hollywood to see Pushing Daisies creator Bryan Fuller introduce a Paley Festival screening of the final three episodes of Pushing Daisies, which ABC will finally air (after a delay of several months) beginning at the end of May.

On hand to send off Pushing Daisies with Fuller were series stars Chi McBride (who jokingly said that they would be giving out "torches and pitchforks" in the lobby after the screening) and a tearful Ellen Greene, who said that as much as the audience loved these characters, the actors who played them loved them even more.

And love them we did. I'm not at all ashamed to admit that I got misty-eyed watching the exquisite final episode of Pushing Daisies, which manages to both offer closure for those of us who were utterly devoted to the whimsical series while also leaving things open-ended enough for Fuller to continue telling the story of Ned and Chuck in another medium. (He plans to launch a DC-published Pushing Daisies comic book series this fall.)

Over the course of the final three episodes, the audience was treated to something that's been sorely lacking on television these last few months: the entryway to a magical world where a Pie Maker can bring back the dead to life with a touch, lovers can kiss though plastic wrap, and the murdered can name their killers. True love is found, the wicked punished, and much cheese is consumed. In other words: the return of Pushing Daisies--however painfully brief--is something to be celebrated.

The first of the final troika of episodes, "Window Dressed to Kill," written by Abby Gerwanter, finds the gang--or at least Alive Again Avenger Chuck and Emerson working in tandem--attempting to solve the murder of a window designer at local department store Dicker's where the lavishly created window displays seem to be eerily similar to a series of murders involving their creators. Meanwhile, a secret from Olive's past comes back to haunt her (sort of) when her childhood kidnappers (played by George Segal and Richard Benjamin) break out of jail to see her, leading Olive and Ned to embark on a daredevil adventure involving a stuffed rhinoceros, disguises, and oh, so many lies.

The second, "Water and Power," written by Peter Ocko (with a story by Lisa Joy and Jim D. Gray), involves the murder of Papen County's water and power mogul, the appearance of a certain femme fatale/baby mama (guest star Gina Torres) from Emerson Cod's past, a vendetta, and the little matter of his missing daughter Penny. Plus, a fist sized ruby, glow-in-the-dark flowers, and haughty dog trainer Simone (Christine Adams)!

Finally, there's the series finale "Kerplunk," written by Gretchen Berg and Aaron Harberts, which sees the Darling Mermaid Darlings re-embark on a professional career as synchronized swimmers with the Night of 1000 Bubbles, a traveling water-based circus act. In an intoxicating twist, this episode dives head-first into the childhoods of Aunts Lily and Vivian, exploring the dynamic in their co-dependent relationship and Lily's betrayal of Vivian with Charles Charles... with some, uh, rather explosive repercussions. It also features a slew of guest stars including Wilson Cruz, Wendie Malick, Josh Hopkins, Michael McDonald, Nora Dunn, and Joey Slotnick, some of the very best covers for Ned, Emerson, and Olive, and one of the most memorable deaths ever on Pushing Daisies. (Seriously, this one had my jaw on the ground.) This episode also marks the final installment of Pushing Daisies ever and it sails into the sunset with all of the grace, magic, and beauty with which you would expect of it.

I don't want to give away too much about these episodes, which are far better enjoyed by watching them in full than by reading about them, but I will give you a few tidbits about what to expect when these three episodes air later this summer. Look for a rather surprising declaration of love which is not what you might expect, Ned to explore the danger of being both Clark Kent and Superman, jealousy to rear its ugly head from all sorts of directions, Olive to burst into song (Lionel Richie's "Hello," no less), wintertime hand-holding, some rather clever deaths (and even more clever criminals and con artists), misunderstandings galore, wordplay aplenty, and the return of some familiar faces, including Christine Adams' Simone Hundin, David Arquette's Randy Mann, and Diana Scarwid's Mother Superior. All this, plus glimpses into the childhoods of Olive Snook, Emerson Cod, and Lily and Vivian Charles.

Cult series rarely get to present the endings that their creators originally had in mind. Too often, viewers are left with a cliffhanger of an ending that offers no possible resolution for the characters or a hastily cobbled together ending that unsatisfyingly throws star-crossed lovers together and heals all wounds. I'm happy to say that neither applies to the beautifully orchestrated finale of Pushing Daisies.

The final scenes of Pushing Daisies achieve what most series merely dream of: emotional closure for the audience. The gorgeously shot scenes provide the audience with a bittersweet trip down memory lane, as it were, revisiting several locales that have played key roles throughout the series and giving the climactic final scene a dramatic push; this very moment has been the culmination of everything that has come before. This last sequence also offers some of the series' characters a shot at their happiness while not tying anything up neatly with a bow. For a series that has always prided itself on its delicious whimsy, these final scenes are the icing on the cake. (Or make that lattice crust on the pie.)

The happy endings, in fact, aren't quite endings at all but new beginnings. The series manages to come full circle in its storytelling, bringing us back to the miracle of Ned's gift, which in the end he comes to accept and cherish, rather than fear. And the beauty of the playful and tender conclusion is that all of the characters, from Ned and Chuck to Lily and Vivian (and everyone in between), learn that life truly is for the living. It's a lesson that's underpinned by a decision that Ned and Chuck make together, one that forever closes the door on one element of the series while opening up the story to new possibilities in the future.

In Pushing Daisies, a series that's about the often times blurred lines between life and death, it's this message about really living one's life that each of the characters takes to heart in the very end. Just how Bryan Fuller and Company manage to achieve this, I'll leave for you to see when ABC airs these episodes. But I'll advise you to have a box of Kleenex nearby as we bid adieu to some of the most memorable and heartfelt characters ever to grace the small screen.

ABC will air the first of Pushing Daisies' final three episodes on Saturday, May 30th at 10 pm ET/PT.

Bella Spruce said…
I am so thrilled to hear that they were able to wrap up the series in a satisfying way. I love Pushing Daisies and it is a story that deserves to have an ending as lovely and whimsical as its beginning. I can't wait to see the last episodes (finally!) in May. Thanks for the great review!
4/20/2009

Greer said…
I managed to snag a ticket for this event (lucky me!) and it was just as wonderful as you described. Each of the three episodes were fantastic and it was so much fun seeing them on the big screen! And, it was obvious from the cast and crew who were there that they cared as much about the show as we, the audience, did. I'm heartbroken that Daisies is over but feel happy that we at least now have closure with the final three episodes.
4/20/2009

Maggie said…
Just reading this review made me cry. I'm jealous that you got to see these early and it must have been great to see them in a theater surrounded by PD fans. I'm happy ABC is finally going to show the 3 eps. It was ridiculous that they waited this long when they could have shown them many times since Jan. I think the end is definitely going to make me bawl and I hope it's some thing with Ned and Chuck together as a true couple.
4/20/2009

London Buddy said…
Apart from Olive singing, I wasn't that impressed with 'Windows Dressed To Kill' Although it held important plot points, it wasn't one of the better episodes IMO!
4/20/2009