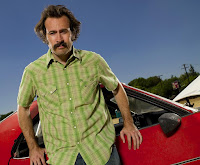 Jason Lee (My Name is Earl) has been cast as the lead in TNT drama pilot Delta Blues, where he will play Dwight Hendricks, a Memphis cop who moonlights as an Elvis impersonator and lives with his mother. Pilot, from Warner Horizon and Smokehouse Pictures, is written by Liz M. Garcia and Joshua Harto and will be directed by Clark Johnson, who will executive produce with George Clooney and Grant Heslov. (Hollywood Reporter)

Proving that the series' casting directors have inherited the comedy casting mantle from Arrested Development and 30 Rock, Fred Willard (Back to You) has signed on to guest star on an upcoming episode of ABC's Modern Family, where he will play the father to Ty Burrell's Phil. [Editor: look for Willard to turn up, oh, before the end of the calendar year.] (Fancast)

Gretchen Mol (Life on Mars) has joined the cast of HBO's upcoming period drama Boardwalk Empire in the recurring role of Gillian, a showgirl in 1920s Prohibition-era Atlantic City. Elsewhere, Sarah Burns (I Love You, Man) will star opposite Laura Dern in HBO's untitled Mike White comedy pilot, where she will play a workplace friend to Dern's Amy, described as "a self-destructive woman who has a spiritual awakening and becomes determined to live an enlightened life, creating havoc at home and work." (Hollywood Reporter)

Pilot casting alert: Amaury Nolasco (Prison Break) will star opposite Radha Mitchell in A&E drama pilot The Quickening, where he will play a homicide detective who was married to Mitchell's bipolar detective Maggie Bird. Elsewhere, Ethan Embry (Vacancy) has joined the cast of USA legal drama pilot Facing Kate, where he will play the brother to Sarah Shahi's Kate who gave up a promising legal career to be a stay-at-home dad. (Hollywood Reporter)

Will Arnett will guest star on NBC's Parks and Recreation later this season. (Televisionary)

Syfy has quietly announced that it will air direct-to-DVD film Battlestar Galactica: The Plan on Sunday, January 10th at 9 pm ET/PT. And the cabler has confirmed that Caprica will be airing in the Friday at 9 pm ET/PT timeslot, followed by repeats of Warehouse 13 at 10 pm. (Futon Critic)

E! Online's Kristin Dos Santos is reporting that, unless the series sees a ratings spike by the spring, it seems likely that this will be the last season for ABC's Ugly Betty. Citing an unnamed mole within the production, Dos Santos writes, "The writers have accepted that this season may be the last and are brainstorming endings now, just in case. The big question is: Who will Betty end up with? The writers room is deeply divided." Those three candidates include Freddy Rodriguez's Gio, Eric Mabius' Daniel, or Chris Gorham's Henry. (E! Online's Watch with Kristin)

Daniel Radcliffe will lend his voice to The Simpsons' Treehouse of Horror XXI, where he will play Edmund, a child vampire that Lisa falls in love with in a parody of the Twilight franchise. (Entertainment Weekly's Hollywood Insider)

E! Online's Kristin Dos Santos is reporting that four former cast members of Melrose Place will reunite later this season on the CW revival series, with Heather Locklear, Josie Bissett, Daphne Zuniga, and Thomas Calabro set to appear in a scene together at the iconic apartment complex. (E! Online's Watch with Kristin)

ITV has announced the cast for the latest adaptation of Agatha Christie's Poirot, once again starring David Suchet as the titular Belgian detective. Joining him in the adaptation of Christie's Murder on the Orient Express will be Dame Eileen Atkins, Barbara Hershey, Hugh Bonneville, and Samuel West. No airdate has been given for the telepic, but it will follow the four upcoming Poirot films Appointment with Death, The Clocks, Three Act Tragedy, and Hallowe'en Party. (BBC News)

CTV has renewed supernatural drama The Listener for a second season, despite the Canadian series' cancellation at NBC. Series, produced by Shaftesbury Films, will air in Canada on CTV and Spaced and internationally on Fox International Channels but currently has no US outlet. (Variety)

Jeri Ryan (Leverage) and Marianne Jean-Baptiste (Without a Trace) have been cast in Lifetime Movie Networks horror telepic Secrets in the Walls, about a woman who discovers that her dream house in the suburbs is haunted. (Variety)

Graham King has launched a television division of his GK films shingle and hired former Lionsgate TV international executive Craig Cegielski as president of the new GK-TV division, which will "focus on programming with strong international appeal in an effort to capitalize on the growing appetite at U.S. nets for international co-production and co-financing deals." [Editor: Congrats, Craig!] (Variety)

The Wendy Williams Show has been renewed for two more seasons on Fox TV stations, keeping the syndicated talker on the air through the 2011-12 season. (Hollywood Reporter)

MTV has acquired domestic television rights to the Michael Jackson documentary This Is It, following a deal with Sony Pictures Television under which the cabler and its channel siblings will be able to air the film in 2011 in a six-year window. (Variety)

Mad Typist said…
Wow, Fred Willard will be playing Phil's father? That is casting genius. I'm giggling just thinking of the possibilities. Modern Family has been brilliant in their guest stars this season - big names, but in roles that make sense and support the main cast, versus pulling attention away from them.
11/18/2009

kallie said…
Modern Family, Parks & Rec, and 30 Rock all do a fantastic job with their guest casting. I am SO looking forward to seeing Fred Willard as Phil's dad!
11/18/2009