Biting Back: An Advance Review of the Final Four Episodes of FX's Terriers 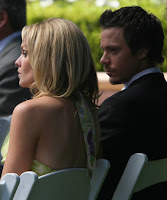 I've been extremely forthcoming about my love for FX's brilliant drama Terriers. Scratch that. I've been gushing about the show--created by Ted Griffin and executive produced by Shawn Ryan--for months now and I wish that more of you were tuning in to this remarkable and unique series.

The first of the final four episodes of Terriers' season begins tonight with the sobering "Asunder," a major turning point for the season both in terms of the overarching conspiracy plot (yes, the shady circumstances of the Montague come back into focus)--which Hank (Donal Logue) and Britt (Michael Raymond-James) are dragged back into--but also the character-driven subplots that have been lurking beneath the surface all season.

I ripped into these next four installments with my teeth last week, insatiable for more of this groundbreaking series, and I wasn't disappointed in the least. In fact, I think that they rank up there with the very best that the series has produced to date, as the serialized plot is shifted into high gear and secrets--both big and small--begin to spill out onto the pavement of Ocean Beach.

The wedding of Gretchen (Kimberly Quinn) and Jason (Loren Dean) drives the plot of tonight's episode but it's the destruction that left around them--the threats of violence, the siren's lure of temptation, spilled drinks and botched plans--that echo long after the closing credits. Gretchen and Jason's life might be filled with hope but for Hank and Britt, their lives are about to get very messy indeed.

Before you ask, yes, I'm being deliberately vague. There is so much joy to be had from Terriers' plot twists ahead, that it would be a shame to spoil them. Far better that you experience them firsthand, feel the searing heat of the emotional grenades that get detonated over the course of these four episodes, the sensation of loss, humility, vengeance, and rage that color these installments.

Along the way, we're privy to some crucial backstory as well: just what went wrong with Hank and Gretchen's marriage, why Hank got booted from the force, how Hank met Britt, and how all of these things are all tangled together. And we get a fantastic new recurring character with Laura Ross (Alison Elliott), a muckraking online journalist (or "blogger" as she's dismissively called) who might hold the key to revealing the larger forces of darkness at work in Ocean Beach.

That is, if she survives long enough to publish her next piece.

Laura makes an admirable addition to the Terriers team, her scrappy nature and fringe-element maneuverings a match for those employed by Britt and Hank and Elliott sparkles here, her nose for trouble getting her into some hot water with some dangerous types who wish to do her harm. That is, unless Hank has anything to say about it.

The story behind the Montague and the falsified environmental data--realized in a heartbeat by Hank's genius sister Steph (Katrina Logue)--comes full circle here as that plot becomes the driving force behind the final four episodes. And, why yes, that is Ben Zeitlin (Michael Gaston) and Burke (Daren Scott) lurking around the periphery. Just what is going on in Ocean Beach? What does it have to do with why Hank's drinking buddy Mickey Gosney was murdered? And can Hank and Britt and Laura uncover the truth before it's too late?

Other familiar faces turn up throughout the final four episodes. I was happy to see just how instrumental a role Rockmond Dunbar's Mark Gustafson plays in the proceedings as well as Jamie Denbo's deliciously snarky Maggie Lefferts and others as well. It's a testament to the world that Griffin created that it expands outwards to include some new characters as well as some favorites, a living, breathing landscape that tinged with noir but also realistically drawn.

Meanwhile, look for some major complications in the relationships between Britt and Katie (Laura Allen) as well as between best friends Britt and Hank. Each of these relationships undergoes its own crucible, the bonds that hold them together tested by betrayal and a host of lies. Tonight's amazing episode, "Asunder," brings one of the most painful and emotionally disturbing scenes between Katie and Britt and its aftermath is felt in more ways than one until the final shot of the season, a cliffhanger that ends the thirteen episode run on an unanswered question, one that hangs in the air like cigarette smoke.

But these episodes also recount the quest for adulthood that these happily stunted men embark upon. As they continue the long, hard slog towards maturity, issues of responsibility, of personal duty, and of the greater good become hauntingly clear. Actions have repercussions, they learn. In some cases, hugely dramatic ones. It's how you roll with the fallout that defines who you are. Do you run? Do you stand your ground? Do you turn the other cheek? Or do you hit back even harder?

Ultimately, these fantastic and taut final installments of Terriers are gripping, emotionally resonant television at its very best. I'm not ready to say goodbye to Hank and Britt or to Ocean Beach anytime soon and it would be a travesty if FX didn't renew this extraordinary drama for a second season. (Television needs a show like Terriers like the world needs oxygen.) If you're at all like me, you'll be screaming at the television and/or tearing up when it fades to black at the end of the season.

You'll also be dying with anticipation to know just what happens next to these dogged detectives. Fingers crossed that we get to face the future with them.

Amanda from Georgia said…
Amen! The world does need Terriers.

jdanielle said…
Terriers rocks and I cannot wait to see the the episodes, TIVO is my friend. Also.. have you guys heard about the Reality Rocks Online Fan Awards, I'm surprised I didn't hear about it on this blog first. I'm having so much fun voting for my favorite shows.You wouldn’t believe who’s winning! I'm so excited about it! Check it out and VOTE for your fav shows! I'm voting everday! www.realityrocks.net
11/10/2010

froggytuff said…
The first of the final four episodes of Terriers' Quote unquote....
do you have ANY heads up on the future of Terriers???

What is the likelyhood of there being a Season 2???

WHEN will they let us know??? Sorry about the caps on 'when' but I need to know....cause I need to breathe again.

I pray for the viewership to go up each week. Why doesn't it??? It is THE BEST show ever.

You feel as though you are best friends with these 2 PI's. You love their friends and family equally.

What a great story and a great testament to the writers and actors.....

I guess the lesson to learn is....to have a GOOD Title and also to make the Ads understandable and not misleading.
11/11/2010

Unknown said…
I'm especially loving the character of Hank's sister, Steph. What an amazing, complex, and - for once - accurate depiction of a person with schizophrenia. Terriers had me hooked before Steph showed up, and now, I'm a fan for life.
11/14/2010

Wayne Allen Sallee said…
I think Terriers is a great name for the show, but the ad campaign was wrong. When people ask me, I say that Hank and Britt are either mutts or guys who keep sniffing until they get what they want.