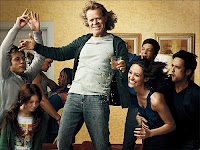 The irony of airing a series based on a hit British series (Shameless) back-to-back with a comedy that satirizes that very process (Episodes) isn't lost on Showtime's president of entertainment David Nevins.

But that juxtaposition is part of the charm of seeing these two series launch on Sunday evening. While tonally dissimilar, there's an anarchistic quality to both Shameless and Episodes.

While both are enjoyable series in their own right, it's Shameless that is the true breakout hit for the network, a remarkable translation of Paul Abbott's hit C4 drama, which deposits the rough-scrabble Gallagher family to the mean street of Chicago.

Overseen by ER's John Wells, Shameless is gripping and absorbing television that's instantly ranks as the best of 2011. At turns hilarious, gut-wrenching, heartbreaking, and sexy, Shameless upholds the high quality of the British original (along with borrowing some plot points in the first few episodes as well). The plot revolves around the resourceful Gallagher kids--led by grimly determined eldest daughter Fiona (Emmy Rossum)--as they grapple with making ends meet after their mother walks out on them and their father Frank (William H. Macy) lurches about in a neverending series of drunken staggering.

She manages to steal the show from right out under Macy. Which isn't to say that Macy is bad as Frank Gallagher, but his character is perhaps the least interesting element of the series. Perpetually drunk and ill-mannered, it's hard to find Frank sympathetic or interesting, which makes the second episode, "Frank the Plank," which focuses on the immature oldest Gallagher, the least interesting of the three episodes screened for press.

Rossum's Fiona, meanwhile, is the beating heart of the series, a woman determined to get "her kids" to adulthood any way she can, sacrificing everything to provide whatever she can for her siblings. But despite for the care she gives to her siblings, she's a woman who is closed off from the possibility of love. Which makes it all the more difficult when love finds her in the form of Justin Chatwin's Steve, a rich kid who is far more than he initially appears.

To be blunt: sparks fly when these two cross paths and the love scene that they embark on in the pilot episode manages to be both messy and sexy, which sums up the show in a nutshell. But Rossum's Fiona isn't the only character who manages to break out of the noisy menagerie: Cameron Monaghan's Ian and Jeremy Allen White's Lip manage to be engaging and compelling characters in their own rights.

The series, which offers a breakneck switch between dark comedy and drama, tackles a number of "serious" issues within the context of its rough-edged story, casting a sharp eye on alcoholism, homosexuality, drug addiction, theft, and welfare fraud, and proves that blood is thicker than water. The the third episode ("Aunt Ginger") is heartbreaking television, equally emotionally stirring and painfully funny, walking a thin line between hard-biting drama and bleak comedy. The result is utterly intoxicating.

While Shameless stands on its own, I'm of the belief that Episodes works best when viewed in marathon form, the serialized episodes flowing nicely into one another with a great sense of momentum. On a weekly basis, however, the episodes (heh) seem somewhat stunted when viewed within the vacuum of episodic television.

Which isn't to say that Episodes is unfunny, because it isn't. Matt LeBlanc plays a brutally arrogant version of himself, clearly willing to skewer his own post-Friends image. And, as married English writers, Stephen Mangan and Tamsin Greig, are top-notch, relishing the opportunity to appear on-screen together again as they explore the highs and lows of both marital relations and the snake pit that is Hollywood, particularly within the television industry.

I still maintain that Showtime should have aired the first two episodes back-to-back as LeBlanc barely appears in the first episode, but, alas, I don't have the clout to make that happen. What I will say is that Episodes is very nearly a deft evisceration of the shallow-mindedness of Hollywood and the culture clash that inevitably happens when you bring a British mentality and reverence for writing into the Hollywood system.

I just wish that creators David Crane and Jeffrey Klarik had pushed themselves a little more, either into deeper satire or into more broad comedy. What happens in the end is that the two sides of Episodes' comedic structure counteract each other a little bit.

Episodes is still charming and funny, but ultimately I want a bit more savagery from these, well, episodes.

Shameless and Episodes launch this Sunday evening on Showtime.

David said…
I thought both these shows were big successes. Shameless crammed more plot, character-development, humor and pathos into 57 minutes than any show I've probably ever seen. Amazing, especially since it's just the pilot.

Episodes is very charming, and I was DYING watching that blonde "Vice President of Comedy" and her horrible smile and facial convulsions. Laugh-out-loud funny!
1/12/2011