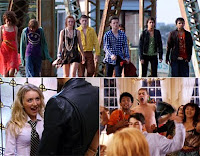 There's been a lot of furor in the last few days about MTV's adaptation of British teen drama Skins, particularly whether the show crosses the line into "child pornography."

The conversation reminds me that just because you might disagree with something, or find it to be immoral, doesn't mean that it is in fact illegal. And that the parties who are throwing around the term "child porn" might actually have better things to do with their time: such as actually focusing on preventing and prosecuting distributors, producers, and suppliers of actual child pornography, rather than point the finger of accusation at this bargain-basement adaptation. While this is smutty (what isn't on MTV), the assertion that the network didn't have all of these legally vetted ahead of time is absolutely absurd.

But that's just my two cents, really. What do you make of the nontroversy?

romance books said…
I personally think the BBC America version is more risque. All of this hype about the American version will do nothing but increase a teen's desire to see it - something I assume the network is banking on.
1/21/2011

Craig Ranapia said…
To be coldly cynical, I suspect the Parents Television Council knows that Skins doesn't meet any rational definition of "child pornography", but I'll be very surprised if its media hits and donor list didn't spike.
1/24/2011