Strength of Conviction: An Advance Review of Season Four of Damages 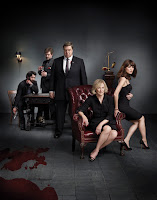 "If you have to ask the question, you already have your answer." - Patty Hewes

Serpentine legal thriller Damages returns for a twisty fourth season of backstabbing and betrayal, though if you don't have DirecTV, you'll have to wait until the inevitable DVD release to check in with Glenn Close's Patty Hewes and Rose Byrne's Ellen Parsons. The show, which aired its first three seasons on FX, moves over to the satellite platform's The Audience Network (formerly called The 101 Network) for an exclusive run. (That's right, exclusive. You're not going to see it anywhere else.)

Given its nature, Damages is one of those tense, labyrinthine dramas that's nearly impossible to discuss without spoiling the plot in some fashion, making it really, really difficult to review in advance. The first two episodes of Season Four ("There's Only One Way to Try a Case" and "I've Done Way Too Much for This Girl"), which I watched a few weeks ago, require little knowledge of the previous three seasons, but--as always--avid viewers are rewarded for their patience and attention. (Minor spoilers follow.)

In this case, the central mystery revolves around High Star, a Blackwater-style private military contractor in Afghanistan, and the wrongful death lawsuit against the company and its founder, Howard T. Erickson, played with pitch perfection by John Goodman. But there are, once again, personal stakes for Ellen and Patty as well, as Ellen--now working for Hollis Nye's former firm--attempts to try the case, reaching out to her high school boyfriend Chris Sanchez (Chris Messina), who worked for High Star. Questions of government malfeasance, of bureaucratic protection, of greed and moral obligation, loom large over the season.

"What price success?" seems to be the major throughline here, seen not just in the motivations of Erickson and his High Star cohorts (including an enigmatic and deadly fixer played by Dylan Baker), but also within the dynamic between Ellen and Patty. Both women have been changed by their collision with one another, not necessarily for the better. Each has taught the other, blurring the line between student and teacher further still. There's a sense that Ellen has perhaps learned too well at Patty's knee, that her mentor's methods have perhaps corrupted her inexorably.

In Season Four, these two are on far more equal footing, and the question that Ellen asked at the end of the third season--unanswered, hanging in the air--colors their interaction. Was it all worth it? Both Patty and Ellen's lives have changed considerably since their first meeting at the beginning of the series, and their encounters here are charged with both distrust and co-dependence. As wary as they each are of each other, they need one another more than either would care to admit. Their lives may have gone in very different directions--SPOILER ALERT!--as three years have gone by since we last saw them. While everyone in Patty's life has seemingly moved on or died or disappeared, she has remained ever constant, never changing, just as vengeful and malevolent as she ever was, just as ruthless to her opponents in court or her adversaries in her personal life. (Witness the firing of a subordinate in the first episode of the season to see what I mean.)

We know that Patty wasn't a very good mother to her son Michael; we saw just how far she was willing to take her punishment of Michael's girlfriend Jill last season, and we're forced to see the ramification of those decisions: the alienation and estrangement from her son, the result of her meddling come to life. Look for Tom Noonan's Huntley--now retired from the police force--to return as a private detective, hired by Patty to track down her missing son. I'm happy to see Huntley back here; his lupine way of interrogating, of asking questions, and turning evidence over in his mind haven't diminished with retirement. He's just as keen and perspicacious as he was before, seeing instantly the skull beneath the skin, the truth behind the lie.

Close is once again in fine form in Season Four, demonstrating that callous and insensitive streak we know so well from Patty, the way that she refuses to back down from any challenge because she can't admit defeat. We get to see that both in her own class action suit--against a pharmaceutical giant accused of killing test patients--and in her interpersonal relationships, as she's forced to contend with self-evaluation in the midst of court-mandated therapy sessions after a (humorous) assault charge. (I won't say who with.) Byrne, strangely attired in 1980s-style throwback businesswoman ensembles, is tougher than she has been in a while, presenting a far more determined and obstinate Ellen Parsons, one who is less of a shadow of her mentor than a lighter photocopy, proving herself willing to resort to tactics and sleight-of-hand to get her way.

Elsewhere, Messina gives a searing performance as Sanchez, particularly in a scene in his van towards the end of the first episode, Baker shines with malevolent intensity, and Goodman is mired in moral greyness, a man who believes in "the gift of our convictions," even as he tries to keep his private military afloat under the scrutiny of a Congressional evaluation of his military contracts.

The move to DirecTV hasn't diminished the whiplash-inducing plot twists nor the socially-conscious plotting of Damages, though there is clearly much more leeway here for harsh language than on FX. (Just the first two episodes alone are particularly rife with swearing, lending the installments a little more gritty realism.) The first episode of the season ("There's Only One Way to Try a Case") is particularly strong, asking difficult questions about society, war, terrorism, guilt, and loss. The price of life in the free world and just how far removed Patty and Ellen's lives are from the front lines in the longest war America has ever known. Ellen's question to Patty has never felt more relevant, really.

The second episode ("I've Done Way Too Much for This Girl"), alas, drags a bit and squanders some of the momentum of the season opener. But there's a lot of set up here, between Patty's sessions with her shrink (Fisher Stevens), her quest to find Michael, Chris' uncomfortable situation, and the lengths High Star's associates will go to keep certain matters under wraps, all jockeying for center stage. Still, that's a minor complaint with so much new content--and a revised status quo--to set up at the start of the fourth season.

Ultimately, Season Four of Damages may lack the visceral crackle of the first season's opener, but there's more than enough dread and mystery to go around here. You'd be wise to spend your Wednesday evenings with Patty and Ellen this summer... or wait for the DVD, if that's not an option.