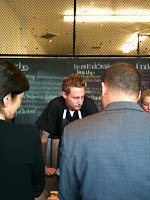 Yes, I ate my way through the menu at ink.sack last night.

ink.sack, of course, being the top secret sandwich shop overseen by Top Chef Season 6 winner Michael Voltaggio, which the chef unveiled last night at a press event held at his upscale boite ink., which is slated to open on West Hollywood's Melrose Avenue next month.

(For more on both restaurants, you can read my feature over at The Daily Beast, ""A Top Chef’s Next Act," because of which I had to keep mum about ink.sack for several weeks now.)

After a champagne-fueled question-and-answer session in the dining room of ink., Voltaggio took us two doors over to the newly unveiled ink.sack, which has a soft opening today (Wednesday) and will be fully operational tomorrow. This is not a restaurant, per se, but a small sandwich shop with no seats, no alcoholic beverages, and no tables whatsoever. (It's intended as a takeaway shop, though there are narrow counters for those of you who want to stand and eat rather than rush back to your offices.) It will be open Wednesdays through Sundays, from 11 am to 5 pm... or until they run out of food, whichever comes first.

As for the food, each sandwich was outstanding in their own way. The ethos behind ink.sack is simple: these are familiar sandwich concepts redone with a modern flair, and the relatively small size of reach (roughly four inches) and low price point ($4-6 each) means that you can mix and match with abandon. So what's on offer? Let's take a preview at the menu.

--Two different kinds of potato chips, including one with salt, pepper, and vinegar and fiery Maryland Crab chips, redolent with Old Bay Spice.

--Vacuum-packed fruit, including one with compressed watermelon, sriracha, and lime, and another with pineapple, jicama, mango, melon, and chile y lemon.

--And ink.sack's fitting take on dessert (which I didn't get to try): ice cream sandwiches. The shop will offer two, including one with peanut butter and jelly, and one with Mexican chocolate chip and Horchatta.

I don't think I can pick a favorite when it comes to the sandwiches (which will change seasonally as well as more quixotically, depending on Voltaggio's wont), as each was incredible in their own way. The cold fried chicken (sous vide chicken is chilled, breaded, and fried and then topped with ranch "cheese"--made from centrifuged buttermilk from which the curds and whey are separated and then flavored--hot sauce, and Gindo's proprietary spice blend) was a knock-out on so many levels, the chicken rendered perfectly smooth by the sous vide process, with a nice balance of heat and coolness. Banh mi had an unexpected jolt of crunchiness from the crackling embedded within.

Elsewhere, The Jose Andres was a Spanish-influenced version of the classic Italian "Godfather" sub, here scented with paprika (from the chorizo) and a winning blend of cured meats and manchego. The C.L.T. and "Reuben" were both clever and thoughtful modern twists on classic American deli sandwiches, elevated to new levels through unexpected ingredients (chicken liver mousse/chicken skin and beef tongue). The maple-pepper turkey is house-brined and perfectly paired with luscious camembert and mustarda; the green pepperiness of arugula sets it off quite nicely.

In fact, my only complaint was with the spicy tuna sandwich: while the flavor profiles were amazing (those strands of nori were genius), the tomato that was contained with the spicy tuna rendered the interior too wet, as a bite led to much of the liquid being dribbled onto the floor (or one's shirt). If you're going to use tomato to bind it together, it needs to be super-drained and removed of all wetness. Otherwise, this sandwich could get really soggy, real fast, especially if you were hoping to get it to go.

But this is a minor quibble from a place that's still tinkering with its menu but has its concept down pat before even opening its doors to the public. The street fruit idea is genius, embodying both the refreshing and reviving qualities of fresh fruit with some nice heat, rendering the vacuum-packed bags as a course that fits snuggly between sandwich and dessert. (It's very nearly a street-level palate-cleanser, to be honest.) The potato chips--both kinds--are made over at the kitchen at ink. (everything is, in fact) and were perfectly crisp and seasoned, with not a hint of greasiness.

ink.sack is the sort of convivial and imaginative sandwich place that we all wish were in our individual neighborhoods. Or at the very least, conveniently located around the corner from our offices. Look for the lines to form almost instantly.

ink. is set to open in September in Los Angeles, while lucky Angelenos can get a taste of ink.sack's amazing sandwiches this week.