The Daily Beast: "Homeland, Justified, Downton Abbey and More: The Best and Worst TV Shows of 2011" 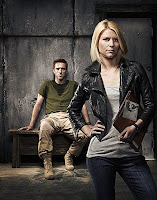 At The Daily Beast, it's finally time for my Best and Worst TV Shows of 2011 list: with 10 shows up for recognition as the best (including Justified, Homeland, Downton Abbey, Community, Parks and Recreation, Game of Thrones, The Good Wife, and more) and five for worst of 2011. (Plus, you can also compare my Best/Worst picks to my colleague Maria Elena Fernandez's.)

Head over to The Daily Beast to read my latest feature, "Homeland, Justified, Downton Abbey and More: The Best and Worst TV Shows of 2011," which--as the title indicates--rounds up the best and worst television that 2011 had to offer. Warning: the story may contain spoilers if you are not entirely caught up on the shows discussed here.

What is your take on our lists? Did your favorite/least favorite shows make the cut? Head to the comments section to discuss and debate.