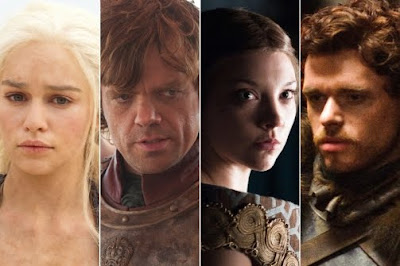 Over at The Daily Beast, you can read my latest feature, "Game of Thrones' Glorious Return," a review of the first four episodes of Season Two of HBO's superlative drama, based on the A Song of Ice and Fire novel series by George R.R. Martin. "Season Two of Game of Thrones is fantastic, overflowing with majesty and mystery," I write. "The night, we’re told, is dark and full of terror, and so is this provocative and enthralling show."

After the ratings and critical heights scaled by the first season of HBO’s Game of Thrones, expectations are dangerously high for the launch of Season 2, which begins this Sunday. Based on the second volume (A Clash of Kings) in George R.R. Martin’s A Song of Ice and Fire series, Game of Thrones has a lot to prove to fans of both the books and of the award-winning HBO drama. Can it top the addictive thrill of the first season? Will it prove to be both loyal to the source material and still work for television?

Fortunately, judging from the four episodes sent to critics, Game of Thrones thrills on all levels. The show is a profound achievement, fusing together the taut narrative framework of the novels with a momentous and swift pace that drives the action forward, while writer/executive producers David Benioff and D.B. Weiss manage almost a baker’s dozen of separate storylines.