The Daily Beast: "Game of Thrones Season Two for Dummies" 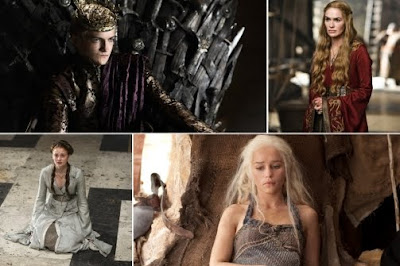 HBO's fantasy series Game of Thrones returns Sunday for a second season with its jargon and (most of its) vast cast of characters intact. Who is the Red Woman? What's the significance of a white raven? What's the difference between the Lord of Light and the Drowned God? I've got you covered with a new glossary that breaks down the jargon of Season 2 of Game of Thrones, returning Sunday at 9 p.m.

Over at The Daily Beast, you can read my latest feature, "Game of Thrones Season Two for Dummies," in which I break down who's who and what's what in the second season of HBO's sweeping fantasy drama. There are actually two features in one: an alphabetical glossary of terminology, places, and concepts within the second season and a gallery that breaks down the 15 new and newish characters (from Melisandre to Xaro Xhoan Daxos) that we meet this season.

In its first season, Game of Thrones—based on George R.R. Martin’s behemoth A Song of Ice and Fire series and adapted by executive producers David Benioff and D.B. Weiss—became a beast as rare as dragons: a critical and ratings success that also fused together genre roots and mainstream appeal.

Season 2 of Game of Thrones is just a few days away, returning to HBO on Sunday at 9 p.m. for another 10-episode run of betrayal, bloodshed, and, er, scenes intended for a mature audience. But if you haven’t read the books, the world that the show inhabits can be a forbidding place without the maps, family trees, and lineages contained within the novels’ vast appendices. And Season 2 furthers the in-world jargon significantly, while introducing a slew of new concepts and places. What is the difference between the Drowned God and the Lord of Light? Who is the Red Woman? And what is the deal with the White Raven?

We delve into the first four episodes of Game of Thrones Season 2, Martin’s second novel (A Clash of Kings), and beyond to bring you up to speed. A note on spoilers: I spoil many details of Season 1 below. But I do not spoil specifics from Season 2, unless you count knowing settings and themes and characters as spoilers. In which case, spoiler alerts!