The Daily Beast: "Borgen, The Thick of It, Bond: What to Watch During the Thanksgiving Weekend" 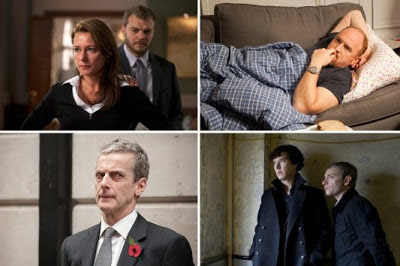 Clear the table, do the dishes, hit the couch—TV is ready for you, with a slew of marathons, miniseries and specials, from Borgen to Bond, from Sherlock to Louie. I offer my take on what to watch on TV and online this weekend.

Over at The Daily Beast, you can read my latest feature, "Borgen, The Thick of It, Bond: What to Watch During the Thanksgiving Weekend," in which I round up some notable television marathons (Borgen! Bond!) as well as selections from Hulu, Netflix, and on linear television, to keep you occupied (or offer you an escape) this holiday weekend.

Thanksgiving isn’t just about gorging yourself on turkey and pumpkin pie--it’s also about getting prostrate on the couch after stuffing yourself … or getting away from your family for a few hours in front of the television.


Fortunately, the television networks have realized that everyone during the long Thanksgiving weekend is in search of escape of some kind, and have gone out of their way to offer a number of marathons during the next few days, from the classic—all Gone With the Wind all the time on AMC!—and the gripping (Borgen) to the tragic (a Here Comes Honey Boo Boo marathon) and the suave (Bond).

But whatever your tastes, The Daily Beast has you covered with a round-up of some of the more interesting, unusual, or compelling programming hitting the airwaves, the Internet, and your Netflix queue over the next few days to sate whatever appetite still remains after the big feast.

Borgen (LinkTV and online at LinkTV.org)

If you haven’t yet fallen under the spell of Danish political thriller Borgen yet, here is the perfect opportunity to watch a marathon of Seasons 1 and 2 as LinkTV will air all 20 episodes of this penetrating and intelligent series over the holiday weekend, from Thursday to Sunday. Revolving around the political, moral, and ideological struggles of Denmark’s first female prime minister, Borgen is hands down the best television show of 2012, and the women at the show’s center—Sidse Babett Knudsen’s sympathetic statsminister Birgitte Nyborg and Birgitte Hjort Sørensen’s ambitious journalist Katrine Fønsmark—deliver two of television’s strongest and most nuanced performances in a show that holds up a microscope to the political and media spheres in Denmark. The result is an unforgettable and insightful drama that will have you forgetting that you’re reading subtitles.

Bonus tip: Don’t worry if you don’t have DirecTV or Dish or if you’re away from your television this weekend: you can watch the episodes online at LinkTV.org for two weeks after the on-air marathon.