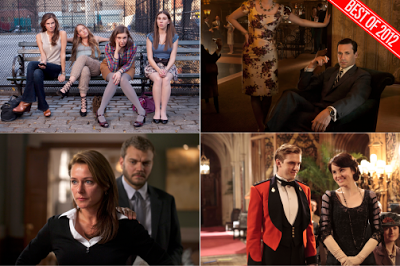 From Borgen to Downton Abbey to Girls, Jace Lacob and Maria Elena Fernandez pick the 10 best TV shows of the year. Warning: may contain spoilers if you are not entirely caught up on the shows discussed here.

Over at The Daily Beast, you can read my latest feature,
"The 10 Best TV Shows of 2012," in which Maria Elena Fernandez and I offer up our individual Top 10 TV Shows lists for 2012. My list, not surprisingly, contains shows like Borgen, Mad Men, The Good Wife, Louie, Parks and Recreation, Shameless, and others. What was on your list this year?

Now is the winter of our (TV) discontent. After a fall season that largely failed to deliver on the promise of new shows—and, in some cases, returning programs as well—it’s time to take a look back at the year in television as a whole, as we try to remove such canceled shows as Partners, The Mob Doctor, and Made in Jersey from our collective memory.


But rather than dwell on the very worst of the year (ABC’s Work It!), let’s celebrate the best of what the medium had to offer us over the last 12 months. Below, our picks for the 10 best shows of 2012, which include a Danish political drama, a sumptuous period drama, a resurrected primetime soap, and a navel-gazing comedy.

A few caveats before proceeding: these are individual lists representing personal opinions; omitting a particular show does not invalidate the rest of the list, nor does including a specific show; and the lists are limited to what aired on U.S. television during the calendar year. Finally, a WARNING: For those of you who aren’t entirely caught up on the shows selected, read on at your own risk—the descriptions contain many spoilers.


He Said: Jace Lacob’s 10 Best
‘Borgen’ (LinkTV)
No other show comes this close to epitomizing the best of television this year as the exquisite Danish political drama Borgen, which depicts the rise to power of Denmark’s first fictional female prime minister, Birgitte Nyborg (Sidse Babett Knudsen) amid the infighting and back-biting that categorizes partisan politics around the world. As Birgitte sacrifices everything for her position—her marriage, her children, and even her sense of self—her journey from naïve crusader to hardened politician is juxtaposed against that of ambitious journalist Katrine Fønsmark (Birgitte Hjort Sørensen). The two women deliver two of the best performances on television of the past decade, reveling in, rather than avoiding, the realistic flaws of their respective characters while overcoming the institutionalized misogyny of their respective spheres. Brash spin doctors (including the great Johan Philip “Pilou” Asbæk as Kasper Juul), venal civil servants, and arrogant tabloid magnates spin in orbit around Birgitte, as Borgen delves into the interlocking worlds of politics and the media. The result is nothing less than riveting, insightful, and heartbreaking, not to mention powerfully original.

‘Girls’ (HBO)
Despite its deeply polarizing nature, the first season of Girls—Lena Dunham’s navel-gazing HBO drama—proved itself every bit as witty, sharp, and biting as the promise exhibited in those early episodes, perfectly capturing the insular world of privileged and underemployed 20-somethings in Brooklyn with astute honesty and self-effacing charm. In Hannah Horvath, Dunham has created a character who is so oblivious to her failings, her egotism, and her flaws that it’s impossible to look away from her—whether she’s eating a cupcake in the bath, getting an STD test, or breaking up with her quirky boyfriend Adam (Adam Driver)—or to not fall in love with her don’t-give-a-damn attitude as she bares her body and her soul, even as the show skewers the elitist sensibilities of Hannah and her friends: flighty Jessa (Jemima Kirke), prim Marnie (Allison Williams), and sheltered Shoshanna (Zosia Mamet). Alternately awkward, tender, funny, and depressing, Girls is more than just Hannah and her sisters; it’s a brilliant portrait of disaffected youth on the delayed brink of adulthood.

‘The Good Wife’ (CBS)
Whether you loved or hated the storyline involving kick-ass legal snoop Kalinda (Archie Panjabi) and her psychotic estranged husband, Nick (Marc Warren), this year on The Good Wife had more than enough to offer: its typically intelligent and insightful analysis of politics, the media, technology, and cultural mores, as viewed through the prism of the legal system and the tumultuous marriage between the title character, Julianna Margulies’s Alicia Florrick, and gubernatorial candidate Peter (Chris Noth). Nathan Lane—appearing as the court-appointed trustee after Lockhart/Gardner finds itself moored in bankruptcy proceedings—has been a welcome addition to the show, sowing seeds of distrust among the partners at the firm during an already shaky time. As always, the show excels at dramatizing the internal struggles within Alicia; as her career has advanced, her sense of morality has grown ever more flexible, and her sense of compromise and sacrifice have been tested at work and at home. The slowly thawing dynamic between Alicia and Kalinda provided a measured exploration of trust issues in the wake of betrayal from a friend, while Will (Josh Charles) had his own fortitude tested by a grand-jury investigation and suspension, and Diane (Christine Baranski) fought to keep the firm afloat. Few shows remain as nuanced and smart as this one, regardless of whether they’re on cable or broadcast television, nor do many offer as much grist for thought as each episode does, along with insight, subtlety, and humor. If last season’s sly and hilarious elevator scene didn’t make you chuckle aloud, you have no soul. The Good Wife, as always, isn’t just good; it’s great.