The Daily Beast: "Is This The Real Carrie Mathison?" 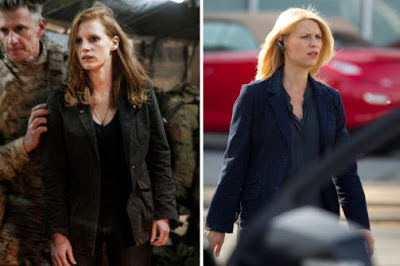 Who is the real Carrie Mathison? I explore the thematic overlaps between two female spies now stealing our collective attention: Claire Danes’s character on Homeland and Jessica Chastain’s Maya in Zero Dark Thirty. WARNING: the following contains plot details from the latest episode of Homeland. If you are not up to date, read at your own peril.

Over at The Daily Beast, you can read my latest feature, "Is This The Real Carrie Mathison?," in which I compare the similarities and thematic overlaps between Homeland's Carrie (Claire Danes) and Jessica Chastain's pseudonymous CIA agent "Maya" in Kathryn Bigelow's upcoming Osama bin Laden manhunt film Zero Dark Thirty, out December 19th in New York and Los Angeles.

“We fight with what we have.”

On the most recent episode of Showtime’s byzantine terrorism thriller Homeland, Carrie Mathison, the damaged, disgraced, bipolar CIA analyst played by Emmy-winner Claire Danes, finally came face-to-face with the terrorist that she had been doggedly pursuing for years, a hunt that put both her career and her sanity in jeopardy.

While the fanatical Abu Nazir (Navid Negahban)—responsible for the death of countless innocents and for brainwashing Marine Nicholas Brody (Damian Lewis) and transforming him into an instrument of vengeance—had the upper hand in this standoff, the tête-à-tête that followed was remarkable for the fact that Carrie was staring into the face of her adversary, and the words that he spat out at her, hogtied though she was, reflected Carrie’s own indomitable will.

“Do you have the perseverance, the tenacity, the faith?” a seething Nazir asked Carrie, referring to his own will to “exterminate” the American people, even if it takes “three centuries” to do so. His extremism is a distant relative to Carrie’s own, her flawed moral compass guided by the belief that Abu Nazir was planning a major attack on the United States and that Nicholas Brody had been turned.
But what their conversation revealed was that Carrie does have all of those characteristics, embraced on the long road to tracking down Nazir, qualities shared by Carrie Mathison’s sister in arms, Jessica Chastain’s Maya, in Kathryn Bigelow’s sensational Osama bin Laden film, Zero Dark Thirty, which opens Dec. 19 in New York and Los Angeles.

It’s impossible to watch the remarkable Zero Dark Thirty without thinking of Homeland or of Carrie Mathison. Like Abu Nazir, they too fight with what they have: drawing on a wellspring of tenacity and perseverance, and an unerring faith that what they are doing is not only right, but just.