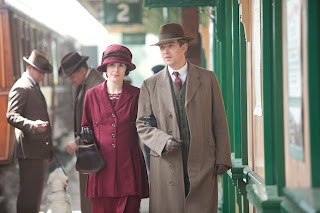 Season 3 of beloved British costume drama Downton Abbey has broken a number of ratings records, becoming the highest-rated PBS drama of all time, according to PBS. Plus, Masterpiece executive producer Rebecca Eaton reacts to the day-and-date broadcast issue.

At The Daily Beast, you can read my latest feature, "Downton Abbey Breaks Records," in which I talk to Masterpiece executive producer Rebecca Eaton about the same-day broadcast issue and whether the show will be affected by the departure of Dan Stevens.

24 million viewers tuned in to watch the third season of Downton Abbey.

Just think about that for a second: 24 million viewers. In an age of increasingly fragmented television viewing, those numbers are even more staggering when you compare those figures next to say, a recent episode of NBC's Smash, which garnered roughly a tenth of that audience. Those numbers are huge for broadcast and cable, but considering that they're associated with a costume drama airing on a public broadcaster, even the Dowager Countess might choke on her tea upon seeing them.

In fact, Season 3 of Downton Abbey, which wrapped up its run last month, broke all records among households, according to finalized national ratings obtained from PBS, making Downton the highest-rated PBS drama of all time.

The third season of the British costume drama—which airs Stateside as part of Masterpiece Classic—had a season average rating of 7.7 and an average audience of 11.5 million across the seven week run. Compared to the second season, those ratings are up a stunning 64 and 65 percent respectively. Even more shocking: the overall cumulative ratings for Season 3 of Downton Abbey—that 24 million figure—show an increase of 7 million viewers from the sophomore season.

In fact, the controversial third season finale of Downton, which aired on February 17, was the highest-rated show on any network that night, posting a 8.1 national rating and an average audience of 12.3 million, numbers that placed it well above any other show on broadcast or cable that evening.

Online streams of the show share a similar story: On the PBS Video Portal and PBS mobile apps, Downton Abbey video content was viewed 13.9 million times since January 1, with full Season 3 episodes comprising the lion's share at 9.7 million views, an increase of 2.1 million streams from Season 2.

"We are so pleased with the loyalty and support U.S. audiences have shown Downton Abbey throughout this season," said Masterpiece executive producer Rebecca Eaton in a statement. "We look forward to more great drama and new challenges for the Crawley family in Season 4."

Reached via email for a comment, Eaton said that the success of Downton Abbey couldn't be reduced down to just one element. "I wouldn't pin this kind of success on just one thing,” she wrote in an email to The Daily Beast on Monday. “It is a combination of word of mouth, great reviews and massive press coverage, social media chatter, and award recognition. This is an audience that we've been building up over the last three seasons."

Still, said Eaton, no one at PBS or Masterpiece could have predicted that the show would become the highest rated PBS drama of all time: "No. None of us did. A good solid hit was in our sights, but one for the record books? No. Lucky us!"