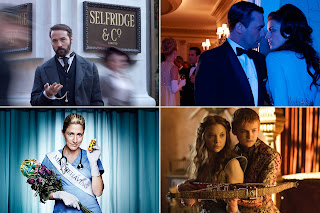 How to choose from the slew of content about to hit the airwaves? From miniseries (Jane Campion’s Top of the Lake) to returning favorites (Game of Thrones) and new offerings (Rectify), I makes my picks for what's worth watching on television this spring.

Over at The Daily Beast, you can read my latest feature, "Game of Thrones, Mad Men, Bates Motel: 15 Shows Worth Watching This Spring," in which I offer up 15 television shows to check out in the coming months, from the tried-and-true to those off the beaten path.

With the promise of warmer weather just around the corner, a slew of new and returning television shows are hitting the airwaves. HBO welcomes back Game of Thrones on March 31, AMC travels back in time for another season of Mad Men on April 7, and Sundance Channel offers two spellbinding new original dramas: Top of the Lake, a mystery series from co-creator Jane Campion, and Rectify, a searing drama that looks at what life is like after being released from prison after 19 years. But it’s not all heavy drama: two serial killer thrillers are on tap, with A&E’s Bates Motel squaring off against NBC’s Hannibal (as in Lecter), the Doctor returns with a new companion in Doctor Who, and HBO’s Veep returns for another season of vice-presidential comedy. I round up 15 new and returning television shows that are worth checking out this spring.

Top of the Lake (Sundance Channel)
The Piano writer-director Jane Campion and the film’s Academy Award-winning star Holly Hunter reunite in the seven-part Sundance Channel miniseries Top of the Lake, which stars Mad Men’s Elisabeth Moss, Peter Mullan (War Horse), David Wenham (The Lord of the Rings), and Lucy Lawless. Set in the breathtaking wilderness of New Zealand, the miniseries charts the disappearance of a pregnant 12-year-old local girl and the journey of a detective (Moss), returned home to care for her ailing mother, as she struggles to discover what happened. What Moss’s Robin Griffin discovers is a world of savagery and wonder, as she is forced to trace both the girl and her own dark history. Gorgeous, provocative, and mythical, Top of the Lake is not to be missed. (Launches March 18 at 10 p.m.)