BuzzFeed: "Why Danish Political Drama Borgen Is Everything" 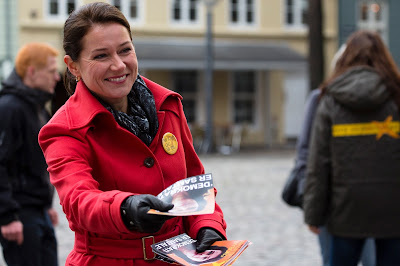 The Scandinavian drama, from creator Adam Price, is a dazzling exploration of the intersection between politics and the media that everyone should be watching. The television masterpiece returns to American screens — on KCET and LinkTV — on Oct. 4 for its third (and likely final) season. Minor spoilers ahead.

At BuzzFeed, you can read my latest feature, "Why Danish Political Drama Borgen Is Everything," in which I review the third (and likely final) season of Danish political drama Borgen, which returns to the U.S. on October 4. (After writing about the Nordic Noir phenomenon last June, I named the show the best show of 2012 when I was at The Daily Beast and I stand by that metric. This is unlike anything on television.)

I’ve been passionately shouting at the top of my lungs about Danish political drama Borgen for the last year and a half. The groundbreaking and riveting show — which returns for a third season next month in the U.S. on LinkTV (and in Los Angeles on former PBS station KCET) and online — feels as if the best parts of The West Wing and The Newsroom were put in a blender and puréed… before being transformed into a gorgeously stylized haute cuisine dish. It is a staggering work of sophisticated beauty and dazzling intelligence.

Created by Adam Price, the superlative Borgen is often grouped together with its Nordic Noir kin — Forbrydelsen, which went on to be remade by AMC into The Killing, and Broen, which was adapted by FX as The Bridge — but the show doesn’t fit into the dark, dreary, and often depressing Nordic Noir category. For one thing, Borgen represents a rare streak of optimism and hope that isn’t typically seen in Scandinavian drama, which tends to revel in its almost all-consuming nihilism and darkness.

Borgen (which is often translated as “Government,” but actually means “The Castle,” a nickname for Christiansborg Palace, the seat of Parliament, the office of the prime minister, and the Danish supreme court) is gut-wrenching in its own way. The first two seasons of the show followed the ebb and flow of Denmark’s fictional first female prime minister, Birgitte Nyborg (Sidse Babett Knudsen). She’s an unlikely leader: a political moderate who ended up elected to the highest office of the country thanks to a quirk of Danish coalition government, and who struggled to balance her professional and personal lives. Her journey — attempting to improve Denmark while fighting off opposition from the left and right — was juxtaposed against that of gifted journalist Katrine Fønsmark (Birgitte Hjort Sørensen), a television news anchor with whom Birgitte occasionally crossed paths. One hallmark of Nordic television is its use of realistically rendered female characters and Birgitte and Katrine are no exception: Ambitious, flawed, and driven, they are spiritual kinsmen even while their work often puts them at cross-purposes. Ricocheting between print, online, and television media, Katrine attempted to find equilibrium in her own life, even as Birgitte’s fell apart in the wake of her national responsibilities: As Birgitte’s marriage imploded, her children’s lives became speculation for the tabloid press, embodied by the insidious presence of Michael Laugesen (Peter Mygind), the editor-in-chief of tawdry rag Expres and its online companion site.