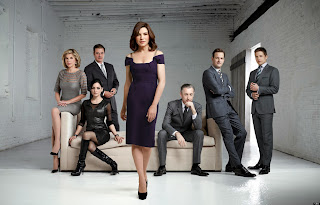 The fifth season of the CBS legal drama continues to shake up its narrative foundations. In next week’s episode, everything changes. Everything.

At BuzzFeed, you can read my latest feature, "The Good Wife Isn’t Just On Fire, It’s A Narrative A-Bomb," in which I review next week's extraordinary episode of CBS' The Good Wife ("Hitting the Fan").

No joke: next Sunday’s episode of The Good Wife (“Hitting the Fan”) might just be the very best hour of television you’ll see this year.
I’m not one of those Good Wife adherents who qualifies their passionate engagement with the Robert and Michelle King-created drama by adding “on broadcast television,” as the show shouldn’t be forced to carry such a backhanded compliment. Even within the FCC-driven parameters of network television, The Good Wife manages to shatter audience expectations and consistently deliver a provocative drama that is both contemplative and incredibly taut.

This is particularly apt, given the seismic changes occurring in the show’s extraordinary fifth season. Even as Alicia (Julianna Margulies) and Cary (Matt Czuchry) covertly plot their exit from the firm, biding their time until bonuses are handed out, the firm itself is already in a state of transformation when managing partner Diane Lockhart (Christine Baranski) is forced out of her position. While the show teased a law firm sans Diane once she became an Illinois Supreme Court justice, her betrayal of partner Will Gardner (Josh Charles), is a shocking twist, as Diane sells him out to a reporter by disclosing the $45,000 he took from a client’s account… only to realize that she didn’t need to do the interview after all.

It’s this conflation of the personal and the professional that largely powers “Hitting the Fan,” written by Robert and Michelle King (and featuring a gorgeously tense score by David Buckley), offering a look at how these lawyers define the boundaries of that dynamic. When one character says to another, “This wasn’t meant personally,” there’s the sense that most everything they do oversteps those distinct categorizations; how can Will, Alicia, and Diane untangle the personal from the professional when those spheres of their lives are tied up so tightly? When is a betrayal only strictly professional?