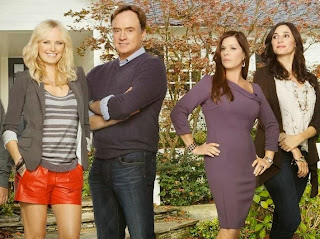 ABC’s quirky blended family comedy — the one that isn’t Modern Family — has quickly become a bright spot in an otherwise largely dull season of television.

At BuzzFeed, you can read my latest, feature, "9 Reasons Why Trophy Wife Is Amazing," in which I offer nine reasons why you should be watching ABC's stellar comedy Trophy Wife, which airs Tuesdays at 9:30 p.m.

Make no mistake: You should be watching ABC’s Trophy Wife. Created by Emily Halpern and Sarah Haskins, this witty show — which was picked up last week for a full season of 22 episodes — might just be the best new comedy of the 2013-14 season. It’s a perfectly sweet-tart confection that focuses on a sprawling Los Angeles family connected by marriage, divorce, and remarriage.

Meet Pete (Bradley Whitford), a lawyer who’s lousy at picking spouses, a concept quickly summed up in the opening title sequence. His first ex-wife is prickly doctor Diane (Marcia Gay Harden); his second ex-wife is spacey oddball Jackie (Michaela Watkins); and his current wife, the titular character, is Kate (Malin Akerman), a former party girl who has found herself the step-mother to three kids, a detour to her life route that she has taken in her stride.

Trophy Wife could be a predictable, comedy-by-the-numbers affair; instead, it’s anything but. It’s a refreshingly charming and mercilessly funny look at modern families that are far more complicated than one might expect. The result is a wickedly funny comedy that ought to be at the top of your DVR season pass.

1. The ensemble cast is fantastic. Seriously.

Trophy Wife gives us a family that is full of rivalries, vendettas, and a lot of love. It might not look like your family or mine, but what the show explores — with humor and heart — is how families support and take care of each other, even when they’re out for blood. It helps that the entire ensemble, led by Akerman, Harden, Watkins, andWhitford and including their sprawling brood of offspring, is at the top of their game, whether it’s Albert Tsai’s scene-stealer Bert, Ryan Scott Lee’s perpetually sunny Warren (witness his Ellen DeGeneres costume in last week’s “Halloween” episode), or Bailee Madison’s twitchy Hillary. Not to mention Natalie Morales’ Meg, Kate’s best friend, who carts a tornado in her wake.

This is an ensemble that seems to have been together for a while, acutely aware of one another’s rhythms and beats, rather than a cast that has filmed only a handful of episodes. The point is that it’s impossible not to fall in love with them.