BuzzFeed: "Why The Mindy Project Is No Longer A Work In Progress, But Perfection" 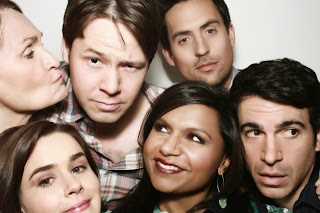 Mindy Kaling’s single-camera comedy is not only hitting all of its marks in its second season, it’s surpassing them… and leaving New Girl in its wake.

The noticeable creative decline of Fox’s once-sterling comedy New Girl — which this season has offered some head-scratching plot developments (who exactly was calling for the full-time return of Coach?) and a dearth of actual comedy — has had a unintentional silver lining of sorts. It’s allowed the show’s winsome timeslot companion The Mindy Project — created by and starring Mindy Kaling — its own opportunity to shine.

And, let’s be honest: The Mindy Project is currently glowing with the white-hot intensity of a thousand suns. Season 2 of this sharp comedy has continued with the strengths of the back half of its freshman year, having jettisoned some of the show’s elements that weren’t working (such as Anna Camp’s best friend character and Amanda Sutton’s Shauna) and focusing on the quirky interplay between the staffers of a women’s health clinic in Manhattan.

The show hasn’t been afraid to make those changes either, restructuring the ensemble so that Beth Grant’s Beverly, Zoe Jarman’s Betsy, and Xosha Roquemore’s Tamra now pack as much comedic wallop as the core trio — Kaling’s Mindy Lahiri, Chris Messina’s Danny Castellano, and a presently paunchy Ed Weeks’ Jeremy Reed — and writer/actor Ike Barinholtz’s Morgan Tooks. I might have described the latter as a scene-stealer, but the truth of the matter is that each of these players can now walk off with a sequence tucked firmly under his or her arms. That’s a real feat for any comedy, particularly one that initially appeared as though it might not make it through its first season; but something truly alchemical happened along the way with The Mindy Project: It not only found its groove but pushed itself to become something truly great in the process.