BuzzFeed: "Mad Men Returns With An Intoxicating Beginning Of The End" 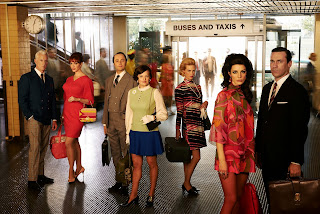 Creator Matthew Weiner prepares for the end game with the first of 14 episodes that start to tie up the AMC period drama. Warning: Minor spoilers ahead!

At BuzzFeed, you can read my latest feature, "Mad Men Returns With An Intoxicating Beginning Of The End," in which I review the seventh season premiere of AMC's Mad Men, which I loved.

The first episode of Mad Men’s final season is an outstanding installment, offering up new beginnings for several of Sterling Cooper & Partners’ employees while pushing the series inexorably towards its ultimate end. And given the list of potential plot points that critics were forbidden to share with readers about the first episode of the final season of Mad Men, it even feels like a bit of a spoiler to say that much about the Season 7 premiere, which airs on April 13 on AMC.

Much discussion has already been made about creator Matthew Weiner’s stern warnings about disclosing information about the plot, characters, setting, and even year in which the new season is set. It’s challenging, therefore, to discuss the actual content of the show itself, but not impossible: There are simply more fiery hoops for critics to squeeze through ahead of broadcast.

It is, of course, Weiner’s prerogative as a show creator, to set these guidelines and boundaries. As the visionary behind Mad Men, he is looking to create an atmosphere in which the viewer comes to each episode without preconceptions formed on dreaded spoilers. Each episode — and season — is therefore a blank slate; episode previews are long on atmosphere and decidedly short on hooks. A phone rings, someone downs a drink, a glance is delivered across a smoke-filled room.

In the age of Spoiler Culture, it’s refreshing for the viewer experience, allowing for the audience to be unencumbered by information that could either derail one’s enjoyment or curtail the pleasure of the unknown. In a more philosophical sense, pre-knowledge of something forces you into a set of circumstance in which your opinion is altered by dint of expectations. And without those, anything and everything is possible: A plot twist can surprise or shock, elicit glee or panic. The universe of the show is closed off and therefore unknowable.

For a show — and a showrunner — that is determined to capture the ebb and flow of life itself, that’s something to be cherished and, well, treasured. And Mad Men prides itself both on the details and on the bigger, sweeping themes of its narrative, serving up a world of flawed individuals from whom it’s impossible to turn away. They make mistakes, fall, and get up again. They’re trapped in amber, existing in a different time period that feels in ways eons from the present day, but Mad Men captures what it means to be alive and how that feels. And it does so with a slick style and pulsing sensitivity that sets the show apart from the slew of copycats that followed in its wake. Weiner has created a modern bildungsroman in the narrative art style of the today; it’s tethered both to the past and the present and to the future. Those who cannot remember the past are condemned to repeat it, it whispers. (Thank you, George Santayana.)