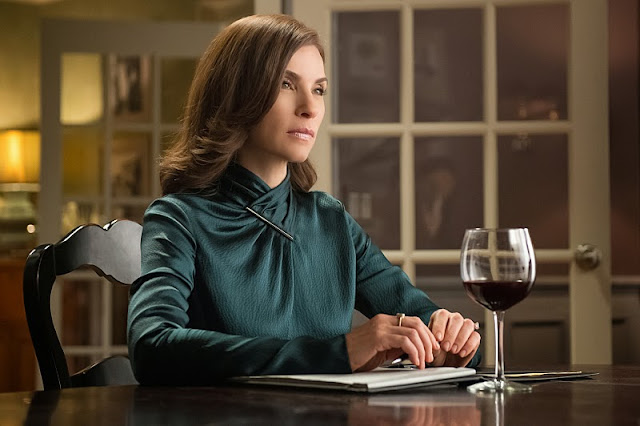 The CBS legal drama, now in its sixth season, continually shakes up its narrative foundations and proves itself fearless in the process. Spoilers ahead, if you’re not up to date on the show.

At BuzzFeed, you can read my latest feature, "The Good Wife Is The Best Show On Television Right Now," in which I praise CBS' The Good Wife and, well, hail it as the best show currently on television. (Yes, you read that right.)

There is no need to be delicate here: If you’re not watching The Good Wife, you are missing out on the best show on television. I won’t qualify that statement in the least — I’m not talking about the best show currently airing on broadcast television or outside of cable or on premium or however you want to sandbox this remarkable show. No, the legal drama is the best thing currently airing on any channel on television.
That The Good Wife is this perfect in its sixth season is reason to truly celebrate. Few shows embrace complexity and risk-taking in the way that this show has done and, even after last year’s stellar season — which saw Alicia Florrick (Julianna Margulies) and Cary Agos (Matt Czuchry) leave their mentors and start their own law firm and which shocked us with the death of Will Gardner (Josh Charles) — the show has pushed itself into even more challenging territory more than 100 episodes into its run.

Created by husband-and-wife team Robert and Michelle King, The Good Wife has always looked to test the plasticity of its concept. Initially a legal procedural with serialized elements, the show balanced a case-of-the-week format for Alicia with ongoing domestic issues. The first season followed Alicia as she struggled with the decision to stand by her husband, incarcerated Illinois State’s Attorney Peter Florrick (Chris Noth), even after he admitted to sleeping with prostitutes. How would she care for their two teenage children, Zach (Graham Phillips) and Grace (Makenzie Vega), while juggling a demanding career and competing with associates 20 years younger than her? And what of her unresolved feelings for her employer, Will?

But these basic queries soon became further tempered by the deep themes that the show has enjoyed exploring over the years, issues of morality, marriage, technology, and legality. The Good Wife incisively probes our collective cultural institutions to find spots of vulnerability and exposes these potential weaknesses, prodding them with a well-sharpened blade. If the show has been about, as the Kings have suggested in interviews numerous times, the “education of Alicia Florrick,” viewers have been able to see how Margulies’ Alicia has had to compromise her ethical integrity in pursuit of other goals, some lofty and idealistic and others personal and perhaps selfish. Alicia has had to exist in the harsh glare of the public spotlight and make choices that others, living lives of quiet privacy, have not. Every one of her actions has been under scrutiny, both that of the public within the show’s narrative and that of the viewer.