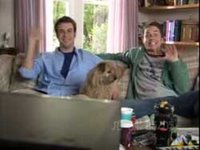 I guess someone was watching after all.

In a stunning move, Variety is reporting today that botched WB pilot and You Tube favorite Nobody's Watching has been picked up by NBC. Kevin Reilly is expected to announce today that the Peacock network has ordered six scripts, following a meeting with series creators Bill Lawrence, Neil Goldman, and Garrett Donovan.

Additionally, NBC will also produce a series of viral videos for Nobody's Watching, which could hit the web as early as September. The news comes a month after a video of the 2005 pilot for Nobody's Watching showed up on You Tube.com, launching a storm of media coverage. (It also doesn't hurt that NBC recently signed a "programming alliance" deal with You Tube.)

The network is negotiating with most of the pilot's stars to return, including series leads Paul Campbell (Battlestar Galactica) and Tarran Killiam. Should the show be ordered to series, it would carry a very insubstantial price tag per episode (less than $1 million), far lower than that of most traditional sitcoms.

"Part of our pitch for bringing back the show is that, for it to succeed, it needs to become more edgy and blur the lines between reality and fiction," said Nobody's Watching co-creator Bill Lawrence.

Further blurring that line is the decision taken by the show's producers to launch an interactive fan website for Nobody's Watching where fans can give notes on the original pilot and make suggestions about how to improve the show.

It's extremely rare for a failed pilot to get picked up at a competing network, let alone generate the sort of publicity that this little pilot has. Let's just hope that this time, somebody's watching.

It's another episode of my new favorite British comedy, Spaced, a wacky 1999 Britcom starring Shaun of the Dead's Simon Pegg and Jessica Stevenson. On tonight's episode ("Epiphanies"), Tim's friend drops by to invite Tim and Daisy out for a night of clubbing and theyinvite Mike, Brian, and Twist to join them. Something tells me it's not as simple as that.

One of my favorite single-camera British comedies returns Stateside for a second season of twisted and bizarre episodes. On tonight's episode, Mark attempts to forget about Sophie by dating April, but manages, in typical fashion, to become her stalker rather than her boyfriend. Meanwhile, Jeremy joins a band but has a hard time convincing everyone that he's not a roadie.

BBC America continues its reairing of the second season of the brilliant Britcom Black Books, which stars Dylan Moran and Bill Bailey. In tonight's episode ("Hello Sun"), Fran begins spending time with a New Age friend (Spaced's Jessica Stevenson) in an attempt to calm down; following another fight, Bernard sends Manny to a therapist.

Vance said…
That's awesome! The show isn't perfect but it is a great start with lots of promise. I hope Paul Adelstein will be able to reprise his role and jump over from Prison Break (which I think I am now over).
7/21/2006