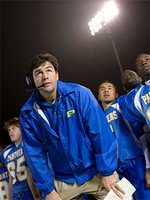 It was with a bit of relief as NBC finally released its mid-season schedule... about two weeks later than promised by topper Kevin Reilly.

No word on what led to the prolonged period between the intended announcement and, er, yesterday, but some rather unexpected results did manage to turn up. Let's take a look:

MONDAY: NBC has kept its entire Monday night lineup intact, including the struggling Studio 60 on the Sunset Strip, which will remain at 10 pm. Many insiders had thought that the Peacock would try shifting the sinking Studio 60 in another slot, but it's staying tight for the moment, following a full season pick-up for the series, albeit at a reduced license fee. Look for a midseason drama (see below) to take over here in a few months' time.

TUESDAY: Newsmagazine Dateline NBC will take over the 8 pm timeslot vacated by struggling freshman drama Friday Night Lights. Hmmm, anyone seeing shades of Reilly's announcement a little while back about programming cheap reality shows only at 8 pm on most nights? Looks like NBC 2.0 is actually happening after all.

WEDNESDAY: Friday Night Lights still won't appear on Fridays, but will instead shift to Wednesdays at 8 pm, taking over for the comedy block formerly occupied by 30 Rock (now on Thursdays at 9:30 pm) and the cancelled Twenty Good Years. But didn't Reilly say that he wasn't doing drama at 8? Um, yeah. Nor do I see why moving Friday Night Lights from one 8 pm timeslot to another will help matters... especially once CBS's Jericho returns with new episodes. But then again, I'm not a programming exec!

THURSDAY: Will blissfully remain the same, with the single-cam comedy block of My Name is Earl, The Office, Scrubs, and 30 Rock. Ahhhhh.

FRIDAY: Will remain the same, though it's been indicated by several insiders that Raines will end up in the 9 pm timeslot come the spring, with Las Vegas wrapping its season a little early.

SUNDAY: Dateline will move to 7 pm on Sundays as of February 11th, followed at 8 pm by new reality series Grease: You're the One That I Want (sorry, but I refuse to make a title-related pun about its future). At 9 pm, it's the Los Angeles-based sixth edition of lost-its-edge reality series The Apprentice (which promises making the losing team sleep in a tent!) and the return of crime drama Crossing Jordan at 10 pm.

While no official word was given about where the Jeff Goldblum-led Raines or Paul Haggis' The Black Donnellys would end up, those who know claim that Raines will pop up on Fridays (see above) and The Black Donnellys will eventually take over Studio 60's Mondays at 10 pm slot in the spring. The second season of reality entry America's Got Talent has been pushed back to the summer.

No mention whatsoever was given to midseason comedies The Singles Table (which saw its order cut from 13 to 6 episodes a while back) or Andy Barker P.I. From what I am hearing, the latter's set is just a mess with constant chaos and a revolving door hiring-and-firing policy as they move to quickly churn out the 13-episode order.

Will Andy Barker ever make it on the air? That's anybody's guess.

One of those series is expected to pop up on the network's single-cam comedy lineup on Thursdays nights and my worry is that, unless 30 Rock starts to perform, The Singles Table or Andy Barker will wind up at 9:30 pm.

On tonight's episode of My Name is Earl ("Born a Gamblin' Man"), Earl is reunited with a former classmate while delivering sandwiches (must have something to do with that list of his) and is tempted to help make him more of a man by teaching him how to gamble. Not quite sure what that's got to do with anything, but tune in tonight to find out.

On tonight's episode ("The Convict"), chaos ensues when Michael discovers one of the new Dunder-Mifflin employees has a prison record, in this episode written by Ricky Gervais and Stephen Merchant, the creators of the original UK version of The Office!

Finally! Scrubs is back on NBC's schedule, where it belongs. And on tonight's episode, the sixth season premiere ("My Mirror Image"), J.D. tries to see himself as a father, while Dr. Cox comes to the astounding realization that his, er, anger management issues may have consequences in the future.

On tonight's episode ("Jack Meets Dennis"), after Liz returns to the arms of her ex-boyfriend (guest star Dean Winters) simply because he asked her to, Jack decides to become her mentor and teach her a thing or two about life.

It's the premiere of the supernatural thriller Afterlife, starring Leslie Sharp and Andrew Lincoln, on BBC America. On tonight's episode, psychology lecturer Robert (Lincoln), takes his students to meet psychic Alison Mundy (Sharp) and, while initially skeptical about Alison's, um, powers, Robert begins to believe after a very personal experience.

Vance said…
I actually liked The Singles Table pilot I saw (pre-Alicia Silverstone) so I hope it gets to air eventually, if only for John Cho's manic performance. Well, at least Friday Night Lights moves out of American Idols way, and hopefully gets to build the bigger audience it deserves.
11/30/2006

Anonymous said…
Hmmm, anyone seeing shades of Reilly's announcement a little while back about programming cheap reality shows only at 8 pm on most nights?

Wasn't that Zucker's announcement, which Reilly quickly backed away from the next day?
11/30/2006