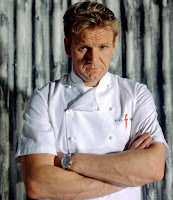 One of the joys of my Sunday evenings (a dreaded time which means the return to work the following day after a far-too-short weekend) the past few months has been sitting down in front of the telly to tune into BBC America's culinary series Gordon Ramsay's F Word.

So I was happy then to discover that the network was launching Season Two of Gordon Ramsay's F Word right on the heels of the Christmas-themed first season, which wrapped up just in time for the holidays.

Hosted by Gordon Ramsay, that foul-mouthed, prickly chef who has built his reputation on the precision, perfection, and elegance of his food as much as he has by the demanding, draconian tactics he uses on sister show Hell's Kitchen, The F Word is meant to be a more, er, personable look into Ramsay's life, bringing us a kinder, softer Gordon in his kitchen and home.

The F Word is not a reality show per se, not in the traditional sense of the word, anyway. Yes, sometimes people are sent home and at times it's hard to distinguish Gordon from his usual screaming-until-his-voice-is-raw self. Sure, that letter f in The F Word's logo (both the show itself and its eponymous restaurant) is as sharp as a dagger's blade, but if I want Hell's Kitchen-style berating, I'll tune into that show. What I'm coming to Gordon Ramsay's F Word for is insight into Ramsay's style of cooking, his ethos about food preparation, some good TV food journalism (from much-missed Giles Coren), and a behind-the-scenes look at what goes into dinner service at an actual running restaurant.

Therefore, I was a little perturbed to learn that in Season Two, Ramsay and the series' producers had mixed things up a little too much, for my taste. Last season, each week Gordon invited a new aspiring chef to act as commis in the kitchen and would send one of them home and one of them onto the next round. Instead, this time around, he's inviting each week a crew of amateur chefs to act as his kitchen staff for the evening. Which makes it more than a little hard to watch as he reprimands and criticizes these guys, most of whom are cooking in a professional kitchen for the very first time. Such shenanigans have a place in Hell's Kitchen, but shouldn't here; the effect is shining the spotlight on such a specific part of the big top circus Ramsay has constructed, but it's the least interesting element to me.

So what does work? Ramsay himself is still compelling to watch, as his passion for his food still shines through beautifully. As a follow-up to last season's experiment in animal rearing (in which Ramsay and his family raised turkeys for Christmas dinner), this season he and the kids are raising Berkshire pigs, which they'll have slaughtered at the end of the show. While it might seem cruel, it is a stark reminder of where our food comes from and that, at the end of the day, it did originate from a living, breathing animal and didn't start live as a plastic-wrapped package at the supermarket.

Ramsay's interactions with celebrities dining at the F Word is also entertaining and unexpectedly funny, such as last night's rendezvous with British actress Kathy Burke, a notorious smoker and drinker who doesn't eat meat; in a funny aside, he forces her to take a blind-folded taste test to see if her palate can differentiate between what she calls poncey food and processed food. In nearly all cases, she fails, preferring even swill beer to a high-quality Czech lager.

And I do think that opening up the weekly culinary challenge to any dish (and not just limited it to dessert, as in the first season) is a good thing. Last season, the winner's dessert would be served in the restaurant that evening as the pudding course, but this time around it's simply pure competition, with the winner walking away just with bragging rights. Of course, it's usually the guest, rather than Gordon, who wins... and last night's episode was no exception, with actress and foodie Angela Griffin (Cutting It) triumphing over Gordon with her recipe for lasagna.

Plus, Gordon has expanded his mission to get Britain's women back in the kitchen to getting the entire nation cooking again and the results are as eye-opening as they are hilarious. If the F Word succeeds at anything, I do hope that it teaches people watching that cooking can be a joy as much as it can be a snap, and that in order to cook a beautifully prepared meal, one doesn't need to be a world-class chef, nor does your kitchen need to be Hell.

8 pm: How I Met Your Mother/The Class (CBS); Deal or No Deal (NBC); Everybody Hates Chris/All of Us (CW); Wife Swap (ABC); Wicked Wicked Games (MyNet)

I can't tell you why I like watching this traditional sitcom, but Julia Louis-Dreyfus is like a warm blanket of coziness after a long Monday. On tonight's episode ("Ritchie Scores"), after Ritchie's teacher (and the object of Christine's affections) Mr. Harris (Blair Underwood) tells Christine that Ritchie is having trouble making friends, Christine signs him up for soccer. Um, Christine, remember: this is the kid that keeps trying to walk through the glass door...

10 pm: Anthony Bourdain: No Reseverations on the Travel Channel.

It's the launch of new episodes of No Reservations, just in time for 2007. On tonight's episode, Tony travels to the African nation of Ghana, where Tony visits the Makola Market and enjoys a local drink called palm wine, which is actually a condensed milk-toffee drink with herbs. Yum!

Rachel Rubin said…
I like the amateur chefs. He is mean to them, but it keeps me in check to realize how very had it is to work. The aspiring chefs make it look so easy.

Those baby pigs were so cute!

Danielle C.F. Maris said…
What I like about "F Word" is that, essentially, it is a foodie variety show. I agree that Gordon bringing in a brigade of amateur chefs just feels too "Hell's Kitchen." It's entertaining but seems out of place in this show.
1/08/2007