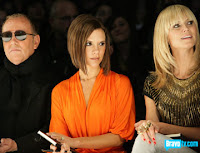 Say what you want about Christian's haughty attitude (though it was tempered remarkably with serious nerves this week), but that boy's collection was, to borrow a well-turned phrase, fierce.

I knew that Christian would take home the top prize on this season's Project Runway because how could the judges, including guest Victoria "Posh" Beckham, not reward the elaborate stylings of a 21-year-old wunderkind whose young age belies a true visionary? Out of all of the contestants at the beginning of the season, Christian was the one to beat this season and it's only fitting that the fierce designer--a former student of Vivienne Westwood and Alexander McQueen--wowed the 2000 assembled guests at the Project Runway show.

I was very happy that the final three designers were Jillian, Rami, and Christian, each of whom brought a different aesthetic and ideal to their collections. While all talented, these three couldn't be more different from one another and it was that very difference that made the final runway show just a sight to behold.

On the runway, Jillian presented first. Jillian's collection was innovative and feminine, a fantastic assortments of looks, fabrics, and techniques. I agree with the judges that her knitwear--a departure for Jillian--was utterly amazing. Her jackets and skirts were breathtakingly gorgeous: beautifully constructed, passionate, fashion-forward and yet utterly feminine. Yet the overall collection lacked cohesion, a fact that Tim Gunn pointed out to Jillian ahead of time. While the separate pieces dazzled and were perhaps the most wearable out of the three collections (for the average woman), they didn't seem to have much relevance or relation to one another. There was no connective tissue here or any sense of an overall story and very little "wow" factor. Still, I would imagine that Jillian will get snapped up by some design firm; she's proven beyond the shadow of a doubt that she can design clothing that women will rush out to buy.

Up next was Rami. I was very curious to see what Rami had pulled together for his collection and whether he had eschewed the gorgeous draping that made him a season-long target for the judges. Happily, while there was some evidence of draping going on, Rami moved away from focusing on those efforts to embark on a voyage of technique: there was draping but also weaving and tight construction. It was a brilliant effort and the collection was utterly cohesive, each piece leading to the next and the next, taking a visual cue from the preceding piece to create a fluid effect. There were astounding and astonishing pieces within Rami's collection, Oscar-worthy gowns that will likely find many clients in his Los Angeles studio looking for their next red carpet garment. However, I did disagree with some of Rami's color choices, notably his preference for turquoise and magenta, which did him no favors on the runway. While the collection was fantastic, with some standout pieces (a silky grey dress with woven bodice, a gold fishtail dress, a floor-length black stunner), I wanted to really see Rami go for broke, to turn in some final pieces that left the judges open-mouthed with amazement.

That was just the reaction that the judges gave final presenter Christian's collections, an avant garde collection inspired by paintings of 15th century armor that translated here as ruffles, redefining clothing's relationship of hard/soft, textural elements, and literal armor. Unlike the other two collections, Christian did stick to a limited palette, here presenting mainly black, cream, and beige. His craftsmanship was pure perfection, each piece topping the one that came before and literally squeezing in the wow factor missing from the other designers' collections. How on earth did this kid manage to create these astonishing designs? I will agree with the judges that the one minor flaw of the collection was its insistence on black, an effect that rendered the first few garments almost indistinguishable on the runway.

Still, the pieces were extremely high fashion, exceptionally daring, and utterly visionary. A pair of slinky pants, paired with a binding jacket, cream ruffled neckpiece and oversized floppy hat instantly summoned Dior and Goya in equal measure. A two-toned belted cocktail dress in coordinated full-body ruffles of tan and chocolate was gorgeous, but the real showstopper was Christian's final piece: a sumptuous two-toned feathered gown, complete with trailing train, impressionistic in its look, fluid, soft, and elegant. It signaled the arrival of a major new force to the fashion world and will likely be Christian's signature calling card. 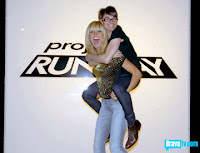 It was no surprise then that a nervous Christian (who looked like he was either going to vomit or fall off the runway in fear) was the winner of Project Runway 4. Hell, even icy Victoria Beckham was gushing over his designs and told Christian that she wanted to wear one of his pieces, a major kudo in the age of well photographed celebrities. Me, I am happy that he managed to pull off a sophisticated, edgy, and ultimately runway-appropriate show that proved just how talented he is. I know that this isn't the last we'll be hearing of Christian Siriano and I wouldn't have it any other way.

Missed last week's episode of Lost ("The Constant")? Here's your chance to catch it again before this season's fourth episode at 9 pm!

On this week's installment ("La Parra de Burriana Revisited"), Gordon Ramsay returns to Spain's Costa del Sol to check in on La Parra de Burriana one year after receiving his help but discovers that the owner is still in dire need of a reality check. (A hint to those with some major DVR conflicts: the episode also airs at 5 pm and 10 pm PT AND at 11 pm ET.)

On tonight's episode ("The Other Woman"), it's a Juliet-centric episode (yay!).Juliet gets a visit from someone from her past and gets orders to prevent Charlotte and Faraday from completing their mission, while Ben offers Locke an enticing deal.

Danielle C.F. Maris said…
"How on earth did this kid manage to create these astonishing designs?" Especially in a room the size of an airplane bathroom!!!
3/06/2008

Anonymous said…
I truly loved all three collections but I was happy that Christian won because I think he could really use the money to start something great. Rami seems to already have found some success and will, without a doubt, go far. And Jillian's talents are going to be in high demand as her pieces had the most wearable quality. I wanted every single skirt in her collection!
3/06/2008

Anonymous said…
I thought Rami's collection was better than Christian's. If Posh Spice hadn't been there, I really think Rami would have been the one to win.
3/06/2008

Giulie Speziani said…
I can't believe the season's over. I'm going to miss Tim Gunn. He reminds me of Batman's butler, regal and dry but always brings a smile to my face.
As for Christian, his last dress was gorgeous. That piece blew me away.
And for the first time, I actually liked what Jillian had to present. It was refreshing to see her pieces wearable and fashionable.
3/06/2008