Casting Couch: Tunney Tries Out "Mentalist," Gruffudd "Meant to Be" at CBS 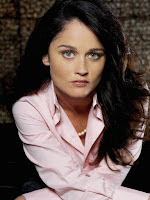 In a development season unlike any other in recent memory, the casting is coming fast and furious as studios try to get their pilot projects shot as quickly as possible before network announcements in May (other than NBC, who will announce its primetime schedule, "written in pencil," tomorrow) and, you know, a possible actors strike in June.

Robin Tunney (Prison Break) has been cast in drama pilot The Mentalist, opposite Simon Baker. She'll play gruff CBI lead agent Teresa Lisbon who has zero patience for Baker's character, a fake psychic who uses his observational skills to help solve crimes. Let's just hope Tunney doesn't, ahem, end up going into any more creepy McMansions that lock from the outside...

Ioan Gruffudd (Fantastic Four) will play the male lead in the CBS drama pilot The Meant to Be's, from Glenn Gordon Caron, opposite Amy Smart. He'll play The Man, a sort of purgatory-based guide and mentor to Smart's character, a bitchy art dealer who is murdered hours after her wedding and discovers that she has been sent back to Earth as a Meant-to-Be, a sort of angel-type who pushes people into the right directions. Sort of like Della Reese with a flashier wardrobe.

Elizabeth Reaser (Grey's Anatomy) has landed the lead in drama Mythological Ex, written by former Veronica Mars scribe Diane Ruggiero, also at CBS. Drama revolves around a woman who is told by a psychic that she's already met her one true love and sets out to track down all of her ex-boyfriends.

What else? CBS' pilot presentation Harper's Island, a sort of ongoing Scream-like slasher drama about a group of wedding guests picked off one by one on a Seattle island that was home to a ruthless killer, has landed three actors, casting Elaine Cassidy (The Ghost Squad), Ryan Merriman (Veritas: The Quest), and Samantha Noble (All Saints).

Finally, Dustin Milligan will play jockish Ethan on the CW's Beverly Hills 90210 spin-off written by Veronica Mars creator Rob Thomas, one of three drama projects he has in contention at various networks.

I've given up on this sad retreat of a once-great reality series, even if the geeks and beauties were finally paired off (too little, too late, I say). If you are still watching, this week's episode ("Lovelorn Science") has the beauties working on a science project while the geeks give out relationship advice to callers on a national radio show. Wow, it really is the blind leading the blind...

On the ninth episode of this addictive British import, the couples have to come up with distinctive brands for their restaurants that will make them stand out amid a crowded marketplace; one wastes all of their marketing budget on printing leaflets that are riddled with errors; others turn up on the radio; Jeremy's cooking class idea is an apocalyptic disaster.

On tonight's installment ("Field of Dreams"), Wayne is forced to clean up the mess after Cael's computer hacking at school comes to the authorities' attention and Hugh's depression threatens to detail the land deal.

Anonymous said…
The Meant to Be's sounds like it has potential but what a horrible title! And I like Amy Smart but am not sure if she can pull off a lead role like this. The casting of Ion Gruffudd is interesting, though.
4/01/2008

Jon88 said…
Mythological Ex ... revolves around a woman who is told by a psychic that she's already met her one true love and sets out to track down all of her ex-boyfriends.

Prediction for season 1 finale cliffhanger episode: "Did I say he was one of your ex-boyfriends?"
4/01/2008

The CineManiac said…
So Tunney is the Maggie Lawson to Baker's James Roday?
Hadn't heard of Harper's Island, but sounds like something I'll be tuning in to.
4/01/2008