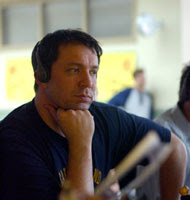 Welcome to your Tuesday morning television briefing. I hope you all tuned in to watch the third episode of Chuck last night as well as a pretty soggy installment of Gossip Girl in which the laws of college applications, logic, and, well, sense of any kind sort of went out the window. But at least the kids looked fabulous, right?

Rob Thomas is proving himself to be quite prolific, in the post-Veronica Mars universe. Pay cabler Starz has ordered ten episodes of half-hour comedy series Party Down, written by the Veronica Mars creator, who is set to executive produce with John Enbom, Paul Rudd, and Dan Etheridge. (Enbom will act as the series' showrunner.) Series follows the lives of six Hollywood wannabes as they attempt to pursue their dreams while trying to get by day by day with their shared catering company. Party Down will likely launch in March 2009. (Variety)

Brenda will be returning to 90210. Yep, Shannen Doherty has agreed to appear in two additional episodes of the teen soap, with the possibility that she will return for more installments at a later time. Look for Brenda to cross paths with Jennie Garth's Kelly in the series' 11th and 12th episodes, set to air next month. (Los Angeles Times)

Prince Charles has turned down an invitation to appear on Doctor Who, a fact that made outbound Doctor Who showrunner Russell T. Davies very unhappy. (Davies called HRH "a miserable swine" for turning his nose up at the offer.) (New York Times)

Production has been shut down on Easy Money and Valentine, Inc., the two hour-long dramas produced by MRC for the CW's Sunday night block. Both series will go on a "planned" hiatus for four to six weeks in order to "give writers time to catch up on scripts." Both series are, however, expected to fulfill their 13-episode commitments and shooting will continue on the eight segments already written. (Hollywood Reporter, Variety)

Andy Richter will guest star on the current season of Bones in an episode, slated to air in January, that will follow Brennan and Booth as they work undercover as a "knife-throwing team named Buck and Wanda" at the circus. Richter will play the circus' owner and ringmaster. (Entertainment Weekly's Ausiello Files)

Jason Jones and Samantha Bee (The Daily Show with Jon Stewart) will co-write and star in an untitled CBS comedy series about the behind-the-scenes world of a celebrity chef (Jones) and the two women (one of whom will be played by Bee) who run his culinary empire. The duo have signed separate talent holding deals with CBS and CBS Paramount Network Television. (Variety)

CW has ordered two additional episodes of Gossip Girl, bringing its season total to 24 episodes. If you feel like you've read this item before, it's because the CW had ordered 24 episodes this season back in May... but then allegedly changed their mind and only ordered 22 segments but seemingly have changed their minds again. (Entertainment Weekly's Ausiello Files)

Showtime has ordered a pilot for dark comedy The End of Steve, written by and starring Matthew Perry (Friends). Project, from Sony Pictures Television, revolves around an egomaniacal talk show host who is forced to work on an afternoon series in Rochester and seeks personal and professional redemption. (Variety)

Jonathan Prince (Cane) has signed a two-year first-look deal with CBS Paramount Network Television to develop series for cable, network, and new media. Prince already has set up an untitled medical drama at CBS about college grads who enroll in a medical school that throws its students into a teaching hospital rather than have them study. Project was co-created with Elle Johnson (Ghost Whisperer) and Fred Einsman (Private Practice). (Hollywood Reporter)

Spike has ordered six half-hour episodes of Worldwide Biggie's videogame-spoofing comedy MoCap, LLC, a mockumentary about a motion-capture studio. The network plans to launch the series--based on a series of web shorts--in January. (Variety)

Anonymous said…
Gossip Girl was pretty ridiculous last night. You have to have some suspension of disbelief with characters like Blair and Chuck, but are we really supposed to believe that Dan wouldn't be able to get a second letter of recommendation for his college application? Or that the Dean at Yale reads WWD? Just seems like sloppy writing to me.
10/14/2008

Anonymous said…
@susie: Yeah the college stuff was completely ridiculous last night on GG. I am in the process of applying to school now and the stuff they were talking about was stupid and wrong. Dan really doesn't have a single teacher at St. Jude's that could write him a recommendation? I somehow doubt he'd get into Yale then if his teachers think so little of him that they don't write a letter for him. At least the Serena and Blaire stuff was fun even if Serena is somehow being nice again.